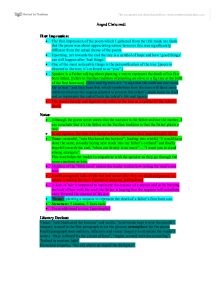 First Impression: * The first impression of the poem which I gathered from the title made me think that the poem was about appreciating nature however this was significantly different from the actual theme of the poem. * Upsetting, yet towards the end the tree is a symbol of hope and how 'good things' can still happen after 'bad things'. * One of the most noticeable things is the personification of the tree. [poem is directed to the tree; it's referred to as "you".] * Speaker is a Father talking about planting a tree to represent the death of his first born infant. [refers to Sicilian tradition of planting an olive or a fig tree at the birth of the first born son]. Olive and fig trees are "a sign that the earth has one more life to bear" and they bear fruit which symbolizes how the sons will have more children whereas the sequoia planted to present this infant's death bears no fruit and so represents the end of both the infant's life and legacy. * The poem literally and figuratively refers to the tree as a symbol of the infant's death. Notes: * Although the poem never states that the narrator is the father and not the mother, I can conclude that it's the father as the Sicilian tradition is that the father plants a tree. ...read more.

Paragraph Five: * How the poem is addressed to the tree. * What burying the infant's hair and "birth cord" is supposed to symbolize. Conclusion: * Personal response. [I find that imagery is used in just the right amount and this prevents the reader's mind from wandering. Liked how the tone changes as it goes along and also liked the idea of what the tree symbolized (link to the burying of the hair and birth cord)] * This poem and the emotions going through the speaker enforce the saying "the greatest tragedy is when a father outlives his own son". Planting a Sequoia - Commentary 'Planting a Sequoia' by Dana Gioia is a father planting a sequoia tree to mark the death of his first born infant son. Upon reading the title, I guessed that the poem would focus on appreciating nature and sequoia trees. I was dramatically incorrect. However, my first impressions after reading the entire poem was that it was quite upsetting although towards the end, the tree becomes a symbol of how 'good things' can still take place after 'bad things' in someone's life. The most noticeable feature of the poem at first was the apostrophe, that is, the poem seemed to be addressed to the tree being planted. ...read more.

The fact that the speaker is the father himself and not a narrator who had nothing to do with the events taking place makes the poem more personal. The most striking feature of this poem, in my opinion, is how it is seemingly addressed to the tree and what the tree represents to the speaker. These factors lead to the belief that the tree is supposed to carry on the life of the infant after death. I believe that the lock of hair (which is supposed to represent the essence of a person) and 'birth cord' being buried with the seed of the sequoia supports my deduction that the father hopes the tree will in a way carry forward the 'essence' of his son. The mention of the birth cord also alerts the reader to how young the speaker's son is and makes the reader empathize further. I believe that the poet has used just the right amount of literary devices to convey his ideas and themes. By not using an excessive amount of imagery, the poet prevented the reader's mind from wandering and made sure the poem didn't sound repetitive. I personally quite liked the idea presented by the burying of the hair and birth cord along with the tree to make the memory of a person live on. In conclusion, I see this poem as one that enforces the saying "the greatest tragedy is when a father outlives his own son". ?? ?? ?? ?? Angad Chaturvedi ...read more.