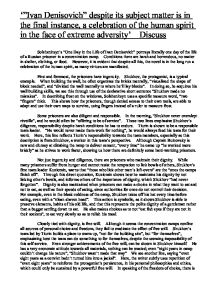 (English Literature) &quot;Ivan Denisovich&quot;, despite its subject matter is in the final instance, a celebration of the human spirit in the face of extreme adversity.&quot; Discuss.

'"Ivan Denisovich" despite its subject matter is in the final instance, a celebration of the human spirit in the face of extreme adversity' Discuss Solzhenitsyn's "One Day in the Life of Ivan Denisovich" portrays literally one day of the life of a Russian prisoner in a concentration camp. Conditions there are harsh and horrendous, no matter in shelter, clothing, or food. However, it is evident that despite all this, the novel is in the long run a celebration of the human spirit, as many virtues are manifested. First and foremost, the prisoners have ingenuity. Shukhov, the protagonist, is a typical example. When building the wall, he often organizes the bricks mentally, "visualized the shape of block needed", and "divided the wall mentally to where he'll lay blocks". In doing so, he acquires his wall building skills, we see this through use of the declarative short sentence "Shukhov made no mistakes". In describing frost on the windows, Solzhenitsyn uses a specific measure word, "two "fingers" thick. This shows how the prisoners, though denied access to their own tools, are able to adapt and use their own ways to survive, using fingers instead of a ruler to measure frost. Some prisoners are also diligent and responsible. In the morning, "Shukhov never overslept r�veille", and he would often be "offering to be of service". ...read more.

Shukhov then gives away one of his biscuits to Alyosha, simply from his sympathy that he "makes himself nice to everyone but doesn't know how to earn anything", this act is also a revelation of virtue by his free will. Finally, prisoners are empowered with the ability to make the choice in their beliefs. Alyosha for example chooses to believe in God and Jesus, having faith that being in prison is not about suffering but this lets you "have time to think about your soul"; and from Shukhov's observation that "His voice and his eyes left no doubt that he was happy in prison" this is proof that Alyosha's faith in God, in hope is so strong, even in such adversity. Lastly and most importantly is comradeship. Throughout the novel, we see real bonds between the prisoners. More evidently, is the comradeship between Shukhov's team. When they surround Tiurin to hear his story, this metaphor: "It was a family, the team" clearly shows the tight links between the men. The protagonist also reveals his strong trust in his team leader, this faith is reinforced through the metaphor "Tiurin was a father to the team", and the firm declarative "His team leader would never give him away". Additionally, in the narration, Solzhenitsyn deliberately uses the collective "they" in "what a pace they set...why shouldn't they race on..."and many other phrases during the construction of the wall, effectively building an unconscious state of family, community between the zeks. ...read more.

In the canteen, there is further unkindness. The writer suddenly lapses from the past into the present tense "They fleece you here, they fleece you in the camp, they fleece you even earlier", with this technique along with the second person narrative "you" accentuate the unfair yet perpetual swindling that occurs, when the ones higher in the hierarchy, the cook, the sanitary inspector and others, take advantage of the zeks and filch some of their rightful portions. Also, in the line "And get away from the serving hatch!", Solzhenitsyn effectively uses what an authority would shout out as a direct quote, an exclamation mark here heightens the severity and callous feelings from this tone of voice. In conclusion, this novel shows many virtuous qualities, as well as some negative qualities. However, as the former is insisted so often and so strongly by the writer, especially through the protagonist, Ivan Denisovich Shukhov, it cannot be denied that the novel is in fact a powerful, heartfelt celebration of the human spirit, standing out like on a background of harsh adversity. Solzhenitsyn has presented this celebration well as these elements of virtues are neatly interwoven into the text, without any glaring seams of exaggeration or overemphasis on character morality in their thoughts or behaviour, therefore making the existence of such human spiritual qualities more convincing. ...read more.