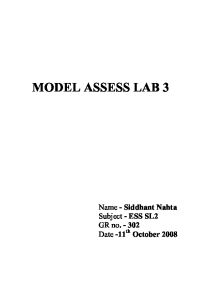 25 x ( 125 - 2) (125) = 4.552 mgO2/ltr Conclusion : After going through data collection and processing I have come to this conclusion that the measure of dissolved oxygen in the 3 water samples are in this pattern. D.O in Source 3 > D.O in Source 2 > D.O in Source 1 There is peculiar observation that has made me conclude that (in this case) , as there is an increase in the height of altitude , the level of dissolved oxygen has decreased . Evaluation : It was mandatory for me to keep some measures in mind before performing the experiment as there are certain errors that can cause a hindrance in the functioning as well as in the readings during the experiment � The water in the B.O.D bottle may not reach up to the brim of the bottle because of which there would be an introduction of an air bubble into the bottle and would give the wrong readings. To get rid of such an error , I poured the water slowly and steadily from the sides of the bottle so as to stop the entrance of the air buuble. ...read more.