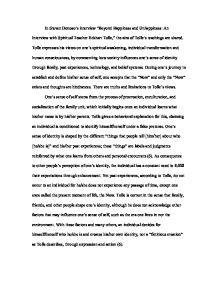 In Steven Donoso's interview "Beyond Happiness and Unhappiness: An Interview with Spiritual Teacher Eckhart Tolle," the aim of Tolle's teachings are shared. Tolle expresses his views on one's spiritual awakening, individual transformation and human consciousness, by commenting how society influences one's sense of identity through family, past experiences, technology, and belief systems. During one's journey to establish and define his/her sense of self, one accepts that the "Now" and only the "Now" exists and thoughts are hindrances. There are truths and limitations to Tolle's views. One's sense of self stems from the process of procreation, enculturation, and socialization of the family unit, which initially begins once an individual learns what his/her name is by his/her parents. Tolle gives a behavioral explanation for this, claiming an individual is conditioned to identify himself/herself under a false pretense. ...read more.

Tolle goes on to say that science and technology, although which fostered innovative inventions, also has its disadvantages. Tolle views that once technology, an expression of thought, is applied to human selfishness, it becomes a magnification of destruction and a component of human madness. Thoughtful processes of scientific application for self interests obstructs alertness; "more science, more technology" produces less awareness of one's self and place in the present moment. There is truth to what Tolle says about technology being a destructive weapon due to human's lack of awareness. Humans are oblivious to the "human madness [that] is threatening to destroy the planet" by preoccupying themselves with continuous inventions to better human life rather than focusing on the destructive effects of the inventions on the world like in WWI and in the Iraq war (9). ...read more.

For example, an individual goes to church praising the Lord and assuming the role of a good brother/sister, then as soon as he/she steps out the church into the real world, he/she commits a sin or breaks one of the commandments. Tolle offers warnings to individuals in the interview. It is important, for the safety of humankind, for one to undergo a spiritual transformation, to strive to live in the present moment, and to think selflessly. One must be aware of himself/herself and one's surroundings. He concludes that human madness and their conceptions of names, technology, and religion will destroy the planet in due course if individuals do not partake in a state of relaxed awareness called "pure consciousness." According to Tolle, an essential factor in whether or not the plant crumbles in turmoil depends on the individual. ...read more.