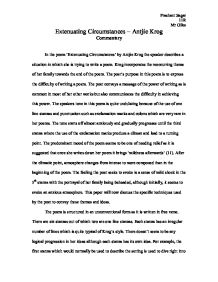 Extenuating Circumstances - Antjie Krog Commentary In the poem 'Extenuating Circumstances' by Antjie Krog the speaker describes a situation in which she is trying to write a poem. Krog incorporates the reoccurring theme of her family towards the end of the poem. The poet's purpose in this poem is to express the difficulty of writing a poem. The poet conveys a message of the power of writing as is common in most of her other works but also communicates the difficulty in achieving this power. The speakers tone in this poem is quite undulating because of the use of one line stanzas and punctuation such as exclamation marks and colons which are very rare in her poems. The tone starts off almost anxiously and gradually progresses until the third stanza where the use of the exclamation marks produce a climax and lead to a turning point. The predominant mood of the poem seems to be one of needing relief as it is suggested that once she writes down her poem it brings 'mildness afterwards' (11). After the climatic point, atmosphere changes from intense to more composed than in the beginning of the poem. ...read more.

For example, when she refers to the words leaking 'down the jugular' (5), or when she describes 'molars shredding mouthlinings' (6), in addition when she refers to her family beheaded 'with aortas reeling staining' (16). The use of a vein and artery could symbolize the flow of words in her blood and depict how writing is in her blood. The language seems to be quite formal and is appropriate to the theme of the poem because the poem is about writing, one would expect that the poem should use a vivid choice of words. Also the poet's use of repetition of the word 'come' throughout the 4th stanza could imply how the speaker is desperate for an outlet of her feeling. This would yet again reinforce the reoccurring theme of power of writing which is a characteristic of her work. The use of a vivid choice of words enriches the poem by adding different meanings to her words which is distinctive of Krog's style. Krog's use of imagery throughout this poem conveys her message with emphasis. For example, when she mentions how 'every word stubbornly' (1) ...read more.

reinforces the sound imagery given through the meaning of the words. In addition, when the speaker refers to 'the blubbering blood swabs' (18), through the use of alliteration and plosives, it emphasizes the gruesome imagery. The effect of the sounds would be to enhance the meanings of the words hence create an ominous atmosphere. In conclusion, the impact of the whole poem is quite significant in that it makes the reader see the power of writing. The theme of power of writing is a distinctive feature of Krog's style and can be seen in her other work such as 'Nightmare of A Samuel Born Krog'. The poet's purpose is thoroughly achieved through the more striking literary features such as the imagery, language and the sound. In my personal opinion, the poem is beautifully written although the imagery of the beheading didn't come as much of a surprise because it is a characteristic of Krog's style to challenge the modern reader with ideas that no one would want to talk about. This could be seen in the vulgarity of 'Salad' or in the questioning of whether she belongs in Africa in 'How Long', but overall a very well written poem. Word Count: 1,198 ?? ?? ?? ?? Prashant Sagar 11R Mr Giles ...read more.