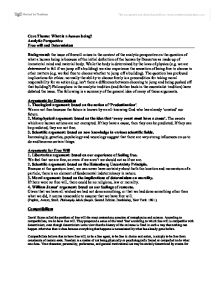 Free Will and Determinism

Core Theme: What is a human being? Analytic Perspective Free will and Determinism Background: the issue of freewill arises in the context of the analytic perspective on the question of what a human being is because of the initial definition of the human by Descartes as made up of immaterial mind and material body. While the body is determined by the laws of physics (e.g. we are determined to fall if we jump off a building) we also experience the sensation of being free to choose in other matters (e.g. we feel free to choose whether to jump off a building). The question has profound implications for ethics: normally the ability to choose freely is a precondition for taking moral responsibility for an action (e.g. isn't there a difference between choosing to jump and being pushed off that building?) Philosophers in the analytic tradition (and farther back in the essentialist tradition) have debated the issue. The following is a summary of the general idea of many of those arguments. Arguments for Determinism 1. Theological argument: based on the notion of 'Predestination'. We are not free because the future is known by an all-knowing God who has already 'created' our future. 2. Metaphysical argument: based on the idea that 'every event must have a cause'. The events which are human actions are not exempted. ...read more.

But you do not have to be in control of any of these things in order to have compatibilist freedom. They do not constrain or compel you, because compatibilist freedom is just a matter of being able to choose and act in the way one prefers or thinks best given how one is. As its name declares, it is compatible with determinism. It is compatible with determinism even though it follows from determinism that every aspect of your character, and everything you will ever do, was already inevitable before you were born. If determinism does not count as a constraint or compulsion, what does? Compatibilists standardly take it that freedom can be limited by such things as imprisonment, by a gun at one's head, or a threat to the life of one's children, or a psychological obsession and so on. It is arguable, however, that compatibilist freedom is something one continues to possess undiminished so long as one can choose or act in any way at all. One continues to possess it in any situation in which one is not actually panicked, or literally compelled to do what one does, in such a way that it is not clear that one can still be said to choose or act at all (as when one presses a button, because one's finger is actually forced down on the button). ...read more.

So compatibilists need to say what the relevant difference is between dogs and ourselves. Many suppose that it is our capacity for self-conscious thought that makes the crucial difference, because it makes it possible for us to be explicitly aware of ourselves as facing choices and engaging in processes of reasoning about what to do. This is not because being self-conscious can somehow liberate one from the facts of determinism: if determinism is true, one is determined to have whatever self-conscious thoughts one has, whatever their complexity. Nevertheless, many are inclined to think that a creature's explicit self-conscious awareness of itself as chooser and agent can constitute it as a free agent in a fundamental way that is unavailable to any unself- conscious agent. Compatibilists can agree with this. They can acknowledge and incorporate the view that self-conscious awareness of oneself as facing choices can give rise to a kind of freedom that is unavailable to unself-conscious agents. They may add that human beings are sharply marked off from dogs by their capacity to act for reasons that they explicitly take to be moral reasons. In general, compatibilism has many variants. According to Harry Frankfurt's version, for example, one has free will if one wants to be moved to action by the motives that do in fact move one to action (Frankfurt 1988 ). On this view, freedom is a matter of having a personality that is harmonious in a certain way. Freedom in this sense is clearly compatible with determinism. (http://www.rep.routledge.com/article/V014SECT1) ...read more.