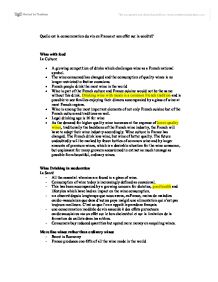 Quelle est la consommation du vin en France et son effet sur la soci�t�? Wine with food La Culture * A growing competition of drinks which challenges wine as a French national symbol. * The wine consumed has changed and the consumption of quality wines is no longer restricted to festive occasions. * French people drink the most wine in the world * Wine is part of the French culture and France cuisine would not be the same without this drink. Drinking wine with meals is a common French tradition and is possible to see families enjoying their dinners accompanied by a glass of wine at most French regions. * Wine is among the most important elements of not only French cuisine but of the French culture and traditions as well. * Legal drinking age is 16 for wine * As the demand for higher quality wine increases at the expense of lower-quality wines, traditionally the backbone of the French wine industry, the French will have to adapt their wine industry accordingly. Wine culture in France has changed. The French drink less wine, but wine of better quality. The future undoubtedly will be marked by fewer bottles of common wine and by larger amounts of premium wines, which is a desirable situation for the wine consumer, but unpleasant for many growers accustomed to extract as much tonnage as possible from bountiful, ordinary wines. ...read more.

All the studies of observation* that were realized go in the same direction and show that the persons in good health, without forbids medical, and that consume a little wine, have less than diseases cardio-vasculaires, notably coronariennes. Which are your consumer counsels to benefit from all the nutritional qualities of the wine? It is necessary to say to the people that to condition to consume moderately, the wine is not bad for health, it even can be beneficial. These profits especially are observed with uniform consumers at the meals. Those that are consumers of big doses outside of the meals do not take advantage of these profits. Thus, if you take 14 glasses of wine a week, divide up on the meals of the noon and in the evening, that can be beneficial. Comparatively, quelqu'un that would take these 14 glasses in the form of a 7 glasses the Saturday evening and of 7 glasses on Sundays evening, no longer would have of the all of profits. Otherwise says, this is not only the drink but also the consumer styles that are favorable for health. All that would explain why the French food method always generated questions from the Anglo-saxons. One observed since a long time that we have, in France, less than diseases cardio-vasculaires that in of other countries despite a nutrition that always is not better. This one called the French paradox. ...read more.