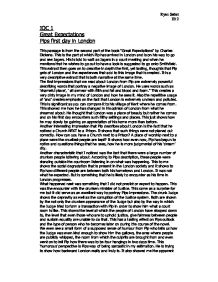 From the book Great Expectations by Charles Dickens, how does Pips first day in London apear in his mind.

IOC 1 Great Expectations Pips first day in London This passage is from the second part of the book "Great Expectations" by Charles Dickens. This is the part at which Pip has arrived in London and is on his way to go and see Jagers. His is told to wait as Jagers in a court meeting and when he mentions that he wishes to go out to have a look is suggested to go onto Smithfield. This extract then goes on to describe in depth the first, yet lasting, thoughts that Pip gets of London and the experiences that add to this image that is created. It is a very descriptive extract that is both narrative at the same time. The first impressions that we read about London from Pip are extremely powerful describing words that portray a negative image of London. He uses words such as 'shameful place', ' all asmear with filth and fat and blood and foam." This creates a very dirty image in my mind of London and how he sees it. Also the repetitive usage of 'and' creates emphasis on the fact that London is extremely unclean and polluted. This is significant as you can compare it to his village of Kent where he comes from. This showed me how he has changed in his opinion of London from what he dreamed about. ...read more.

We even see a small form of a supposed sense of humour from Pip who tells us how the Judge was even kind enough to show him the gallows, the area where people are publicly whipped, the room from which the culprits are brought from and even went on to tell Pip how there was to be four hangings in two days time. This 'humorous' perspective is Pips way of being sarcastic in my estimation. He is trying to show how backward London really and truly is. It also showed me the apparent innocence of Pips character at this stage as he narrates, "This was horrible, and gave me a sickening idea of London". Another point concerning Pips first impressions of London would be the fact of how he describes the appearance of the Lord Chief Justice as mouldy and obviously not his own but rather cloths that he purchased at a cut-price from the executioner. This is another description of how Pip sees Londoners and more so the level at which even those who are meant to be the highest of the justice and law system have plummeted down to. Then we read about how Pip thought himself 'well rid of him for a shilling.' This is in reference to the judge and how at this point Pip is so disgusted but what he has seen as well as the company with which he is with, that he doesn't mind paying for him to just go and leave him along. ...read more.

Another point that should not go unmentioned is the fact that this extract gave me an idea of the type of people Jagers deals with as well as the type of work that he does and hence his own character. We know that Jagers is a lawyer of some sort and by the description of both the court room and a drunken judge we can see that he deals with a great number of unclean and, corrupt and many times in human people. This also gives us an idea of Jagers character as it shows us the fact that he himself may not be the most morally upright individual if he is able to deal with such people on an everyday basis. Over all, I get the feel that Pip is sickened by London on his first visit. He is very descriptive in referring to its faults and shortcomings by using a great deal of negative imagery to illustrate how he sees it. All in all, I personally felt that this particular part of the novel is used to create a first, yet lasting impression in the readers mind of how Pip sees London as well as how Dickens wanted to portray the 'true' London to us as the reader. It sets the tone and atmosphere for the rest of this part of the book as it shows us the grim and filthy surroundings that Pip has found himself in. Ryan Sabet IB 2 ...read more.