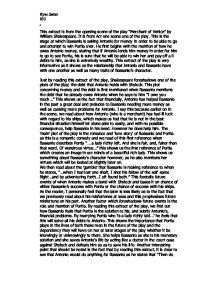 From the play Merchant of Venice by William Shakespeare, anaylsis the relationship between Antonio and Bassanio during the scene that Bassanio requests Antonio for a loan.

IOC Merchant of Venice Bassanio`s request of Antonio This extract is from the opening scene of the play "Merchant of Venice" by William Shakespeare. It is from Act one scene one of the play. This is the stage at which Bassanio is asking Antonio for money in order to be able to go and attempt to win Portia over. He first begins with the mention of how he owes Antonio money, stating that if Antonio lends him money in order for him to go to see Portia, his is sure that he will be able to win her and pay off all debts to him, as she is extremely wealthy. This extract of the play is very informative as it shows us the relationship that Antonio and Bassanio have with one another as well as many traits of Bassanio's character. Just by reading this extract of the play, Shakespeare foreshadows one of the plots of the play; the debt that Antonio holds with Shylock. This plot concerning money and the debt is first mentioned when Bassanio mentions the debt that he already owes Antonio when he says to him "I owe you much..." This shows us the fact that financially, Antonio has helped Bassanio in the past a great deal and preludes to Bassanio needing more money as well as causing more problems for Antonio. ...read more.

This is the reference he makes to the arrows. By referring to the arrows, I personally felt that Bassanio makes reference to Cupid, the God of love. This can be seen as a hidden message to the fact that he intends to 'shoot' Portia with his 'arrow of love' and to therefore gain her hand in marriage. This can also be looked at from a comical perspective in that, Bassanio does not have the means to 'shoot' Portia with his love arrows and therefore need Antonio's money in order to do so. Arrows are expensive. We can interpret much about Portia from what Bassanio says. He brings in mention of Roman history when he says, "her name is Portia, nothing undervalued To Cato's daughter, Brutus' Portia." This is very revealing as to the character of Portia. The reason I say this is because the Portia who Bassanio is describing at this point was a lady who was well known for her wisdom, learning, courage and her love for her husband. These are characteristics that we read about later on in the play about Portia which are true to Bassanio's description. Another interesting link to the past is the link that Bassanio makes to Greek mythology when he mentions the fact that 'many Jasons come in quest of her." ...read more.

This can be looked at as both a flaw and a virtue in his character. I say this because, it could mean that he has learnt what he did wrong and knows how to fix it, or it could mean that he is just taking his chances and gambling on success to come his way. We also read and interpret his love of money. Not only does he use Antonio for his money but he is using Antonio's money in order to get at Portia who is the main monetary prize. Antonio is a stepping-stone towards the main ocean of wealth. This is portrayed when the first thing that he mentions is that Portia 'is a lady richly left..." this showed how his main attraction to Portia was her wealth and not her character and personality like it should be. I feel Shakespeare then wanted to cause some form of confusion within us as the reader with the immediate next phrase that Bassanio says "OF wondrous virtue..." personally, I felt that this would create a clash and confusion of opinions created of Bassanio. At first we may think that he likes Portia for nothing more than her money however we then read about how he makes reference to her virtues and good qualities. As reading it the first time it causes us to be uncertain of whether or not he has true feelings towards Portia or not. ?? ?? ?? ?? Ryan Sabet IB2 ...read more.