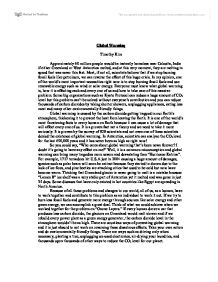 Global Warming Timothy Kim Approximately 60 million people would be instantly homeless near Calcutta, India if either Greenland or West Antarctica melted, and at this very moment, they are melting in speed that was never this fast. Most, if not all, scientists believe that if we stop burning fossil fuels like petroleum, we can reverse the effect of this huge crisis. In my opinion, one of the world's most important necessities right now is to stop burning fossil fuels and use renewable energy such as wind or solar energy. Everyone must know what global warming is, how it is affecting each and every one of us and how to take care of this massive problem. Some big organizations such as Kyoto Protocol can reduce a huge amount of CO2 level but this problem can't be solved without everyone's contribution and you can reduce thousands of carbon dioxides by taking shorter showers, unplugging appliances, eating less meat and many other environmentally friendly things. ...read more.

I doubt it's going to have any effect on me!" Well, it is a common misconception and global warming can bring many tragedies more severe and devastating than "Hurricane Katrina". For example, 1717 tornadoes hit U.S.A just in 2004 causing a huge amount of damages, species such as polar bears will soon be extinct because they started to drown due to the lack of ice floes, and pine beetles are attacking cities that used to be cold but now have become warm. Thinking that Greenland glacier is never going to melt is a mistake because "Larsen B" ice shelf was a very stable part of Antarctica yet it melted and was gone in just 35 days. Some diseases that have only existed in hot countries like Egypt are spreading in North America. ...read more.

All these seemingly grand crisis and disasters can be prevented if we all work hard to invert this problem. There are very few people in our society that hasn't heard of global warming yet very few people are trying to prevent and undo the effects of it. The effects are affecting every part of our world so preventing the dangers that global warming is causing the world, would be a benefit to you and everyone else. If you care for your own society, your own country and our Earth, you must take action and try planting a tree, driving a fuel-efficient car, Install a low-flow shower head because they reduce the CO2 level in our atmosphere. It is a benefit for your own self and your next generations so help the world prevent the problems that global warming is instigating. ...read more.