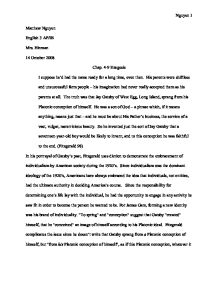 Matthew Nguyen English 3 AP/IB Mrs. Hinman 14 October 2008 Chap. 4-9 Exegesis I suppose he'd had the name ready for a long time, even then. His parents were shiftless and unsuccessful farm people - his imagination had never really accepted them as his parents at all. The truth was that Jay Gatsby of West Egg, Long Island, sprang from his Platonic conception of himself. He was a son of God - a phrase which, if it means anything, means just that - and he must be about His Father's business, the service of a vast, vulgar, meretricious beauty. So he invented just the sort of Jay Gatsby that a seventeen-year-old boy would be likely to invent, and to this conception he was faithful to the end. ...read more.

In this sense, "Platonic conception" could suggest that Gatsby created himself anew ("sprang from") according to an ideal scheme or plan of action ("Platonic conception"), but that he also wanted a kind of love in which sexual attraction was present, a love in which pregnancy ("conception") was possible through sexual intercourse. Part of Gatsby's individualism is based on an imaginative conception that he could recreate himself in order to attain money, status and Daisy Buchanan's love. Whatever that Platonic conception meant to James Gatz, from the ashes of that young boy Jay Gatsby came into existence. ?? ?? ?? ?? Nguyen 1 ...read more.