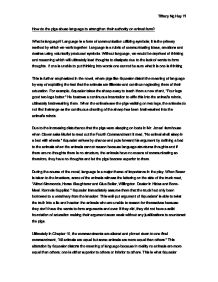 How do the pigs on animal farm abuse language?

How do the pigs abuse language to strengthen their authority on animal farm? What is language? Language is a form of communication utilizing symbols; it is the primary method by which we work together. Language is a rubric of communicating ideas, emotions and desires using voluntarily produced symbols. Without language, we would be deprived of thinking and reasoning which will ultimately lead thoughts to dissipate due to the lack of words to form thoughts. If one is unable to put thinking into words one cannot be sure what it is one is thinking. This is further emphasized in the novel, where pigs like Squealer distort the meaning of language by way of exploiting the fact that the animals are illiterate and continue neglecting them of their education. ...read more.

Squealer arrives by chance and puts forward his argument by defining a bed to the animals when the animals cannot reason because language structures thoughts and if there are no thoughts there is no structure, the animals have no means of communicating so therefore, they have no thoughts and let the pigs become superior to them. During the course of the novel, language is a major theme of importance in the play. When Boxer is taken to the knackers, some of the animals witness the lettering on the side of the truck read, "Alfred Simmonds, Horse Slaughterer and Glue Boiler, Willingdon. Dealer in Hides and Bone-Meal. Kennels Supplied." Squealer immediately assures them that the truck had only been borrowed to a veterinary from the knacker. ...read more.

The fragment, "some animals are more equal than others" highlights the education of the young pigs where they are separated from the rest of the animals and are more privileged. Squealers' demolishing of the other commandments down to one using this rather vague statement to strengthen their authority on Animal Farm to impose authority onto the animals. In conclusion, throughout the progression of the novel, exploits the fact that the animals are catachrestic leading to the deprivation of their freedom of speech. The pigs heavily abuses and distorts language to stress their authority on the farm animals by equivocating the truth. Without language, the animals are deprived of the ability to formulate thoughts. ?? ?? ?? ?? Tiffany Ng Hay Yi ...read more.