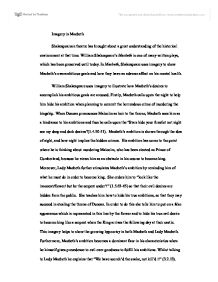 Imagery in Macbeth Shakespearean theatre has brought about a great understanding of the historical environment at that time. William Shakespeare's Macbeth is one of many written plays, which has been preserved until today. In Macbeth, Shakespeare uses imagery to show Macbeth's overambitious goals and how they have an adverse affect on his mental health. William Shakespeare uses imagery to illustrate how Macbeth's desires to accomplish his ambitious goals are aroused. Firstly, Macbeth calls upon the night to help him hide his ambition when planning to commit the horrendous crime of murdering the kingship. When Duncan pronounces Malcolm as heir to the throne, Macbeth sees him as a hindrance to his ambitions and thus he calls upon the "Stars hide your fires/let not night see my deep and dark desires"(1.4.50-51). Macbeth's ambition is shown through the idea of night, and how night implies the hidden crimes. His ambition has come to the point where he is thinking about murdering Malcolm, who has been elected as Prince of Cumberland, because he views him as an obstacle in his course to become king. ...read more.

Macbeth illustrates to lady Macbeth how he is worried of having a soft evil side and how it is endangered from righteousness. Macbeth represents the snake as his evil side, and the wound in it as goodness. On the whole, Macbeth's ambition is shown through imagery, which has a negative connotation, representing his ambition as evil and wrong. Shakespeare then uses imagery to demonstrate how the psychological state of Macbeth is deteriorating because of his overwhelming ambition. Macbeth realizes that he is tormenting his mental state by trying to fulfill his ambitious goals. He admits this to lady Macbeth when he tells her "O full of scorpions is my mind" (3.2.33). The imagery addressed in this line is very significant because it shows the confusion and tension that Macbeth is facing, where the scorpions represent the chaos in his mind. This mental chaos shows how he is losing control over his own self. It is a direct affect of his ambition, because he is trying ever so hard to hide his true self. ...read more.

"Macbeth"). They are saying that Macbeth himself poisons nature and that he is the very cause of violating his own sleep. Macbeth does this by committing sinful crimes, and this leads to his mental deterioration bringing about an imbalance in nature and ruining his own sleep. Shakespeare creates an understanding of such an atmosphere for his audience through the metaphors and the imagery he uses, and helps his audience sense the events as they happen. As a result, Macbeth's ambition causes him to lose control over his mental state of well being, which is demonstrated through the imagery created by William Shakespeare. William Shakespeare uses imagery in his renowned play Macbeth, to demonstrate Macbeth's ambition and how it worsens his mental state. Macbeth's ambition to be king is hypocritical, and this treachery in turn makes him lose control over his mind. Shakespeare's Macbeth is a prime example of Shakespearean culture and belief, representing the power of good over bad. In today's world it would apply to those of religious beliefs, who believe in a Godly figure. The concept of good always being righteous may be puritanical, but its lasting effects are present even today. ...read more.