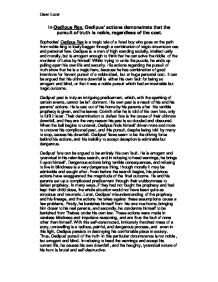 In Oedipus Rex, Oedipus(TM) actions demonstrate that the pursuit of truth is noble, regardless of the cost.

In Oedipus Rex, Oedipus' actions demonstrate that the pursuit of truth is noble, regardless of the cost. Sophocles' Oedipus Rex is a tragic tale of a fated boy who goes on the path from noble king to lowly beggar through a combination of tragic circumstances and personal flaw. Oedipus is a man of high standing socially, intellectually and morally, but is arrogant enough to think that he can solve the riddle of the murderer of Laius by himself. Whilst trying to untie the puzzle, he ends up pulling apart his own life and security. His actions regarding the pursuit of truth show that he is a tragic hero, because he has combination of good intentions for fervent pursuit of a noble ideal, but at huge personal cost. It can be argued that his ultimate downfall is either his own fault for being so arrogant and blind, or that it was a noble pursuit which had an inevitable but tragic outcome. ...read more.

He is arrogant and tyrannical in his relentless search, and in refusing to heed warnings, he brings it upon himself. Dangerous actions bring terrible consequences, and refusing to live in blindness is a very dangerous thing, though morally it may be admirable and sought after. Even before the search begins, his previous actions have exaggerated the magnitude of the final outcome. He and his parents set up a complicated predicament through their stubbornness to defeat prophecy. In many ways, if they had not fought the prophecy and had kept their child close, the whole situation would not have been quite as atrocious and traumatic. Later, Oedipus' misunderstanding of the prophecy and his lineage, and the actions he takes against these assumptions cause a few problems. Firstly, he banishes himself from his one true home, bringing him closer to his real parents, and secondly, he condemns himself to be banished from Thebes under his own law. ...read more.

Not only does he banish himself, but he removes his eyes and absolves himself from the human world. Living in agony as opposed to dying in peace, he not only accepts the punishment, but takes it further, seeing himself as the ultimate crime upon humanity. This shows the epitome of his moral strength and clarity. It is visible that all of his actions are primarily driven by strong ethical grounding, and that the pursuit itself is a very noble and right-minded. Truth is desired by all, though few uphold and pursue it. Oedipus pursues it vigorously, despite it being the ultimate threat. Oedipus' actions are noble in nature but arrogant in action. They show that the pursuit of truth is dangerous and difficult, often with disastrous outcomes, but necessary and, above all, noble. Without the few people like Oedipus in society, all would be blind to the truth. ?? ?? ?? ?? Oscar Louw ...read more.