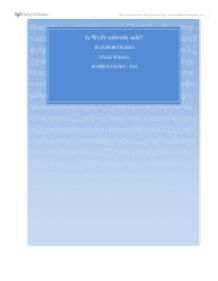 A: -PRESENTATION THE ISSUE Wi-Fi is the short form for wireless fidelity. Wi-Fi is a technology used for networking. People all over the world use this technology. Wi-Fi is now found in devices like laptops, phones, PDA's, game consoles etc. the Wi-Fi networks are mostly set up in offices, schools, restaurants, home. This technology connects the device to the Internet using wireless router, which is connected to the net by the modem. It is very useful and the numbers of users are increasing day by day. Every technology has its advantages and disadvantages. One of the major disadvantages of this technology is that others can abuse it. There are many complains which were faced in the past, i.e. the terrorist abused the technology by sending threat emails from unsecured Wi-Fi networks using the owners IP address. As soon as there were cases like the Ahmadabad bomb blasts where a Wi-Fi system was used in order to send a terror email, usage of Kamran Power Control to send their sinister mail about the bomb blast in Delhi to the media and a unsecured network in Chembur, Mumbai was used to send a threat email and the owner who was innocent was caught. ...read more.

C: Area of impact Wi-Fi adapter lets the device connect to the Internet using the local area network. The free access points in hotels and schools can be used by the thieves or the nasty people to attack certain area or hack some personal information and it becomes very difficult to track the thief because the free access points are used by a lot of people at the same time. Due to this a hacker can gain all the information of the owner as well as misuse it or destroy it in some or the other way. This is generally done to send threat emails and emails informing about bomb blasts. A lot of times hackers can get the SSID of the Wi-Fi user and they can cause harm to the users with help of the SSID. Wi-Fi uses unlicensed 2.4Ghz spectrum and if there are devices like oven, Bluetooth cordless phones it might adversely affect the efficiency of Wi-Fi and may also have effects on the performance. ...read more.

This prevents from the people to decrypt your password or try and connect to it. 3-SSID broadcasting. The router transmits the SSID, which is the name given to the router. If everyone can find the name of the router then its easy for them to hack inside it, so the broadcasting of SSID should not be broadcasted. 4-encryption This is one of the best ways of protecting your network. The two standard encryptions are wireless protocol (WEP) and Wi-Fi protected access (WPA) 5-SSID names. One should change the SSID with a different name every time the password of the router is changed. This will improve the security of your wireless network. After the threat emails sent from Mumbai, cyber crime branch has been trying see to it that the security level is high and there is no loophole left behind. They are trying to make the network secured and with high security possible so that no one can make misuse this technology in future. Mean while preventive measures should be taken to keep the network as secured as possible. 1) Wikipedia. Org, Wi-Fi, http:// www.en.wikipedia.org/Wiki/WiFi (2008-10-10) ?? ?? ?? ?? Ishaan Khanna ...read more.