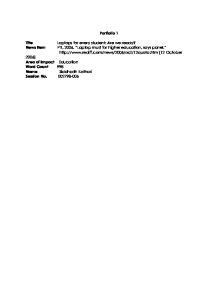 Portfolio 1 Title Laptops for every student: Are we ready? News Item PTI, 2006, "Laptop must for higher education, says panel." http://www.rediff.com/news/2006/oct/12quota.htm [12 October 2006] Area of Impact Education Word Count 998 Name Siddharth Kothari Session No. 002798-006 A - Presentation Of The Issue Laptops are the entry devices to get connected to the knowledge world in cyberspace, and a mindset change is definitely needed for this to be accepted (PTI, 2006). Reports show that the usage of laptops leads to increase in student engagement, determined by higher attendance and fewer disciplinary problems. However, students can also get distracted and use laptops for purposes not relevant to class (Weisenbach, 2006). Many colleges have already documented problems with a "wall of laptops" facing teachers (Dawson, 2006). Huge efforts are also needed to make such initiatives successful, such as teaching students and teacher's ethical computer behavior and identifying and tracking each machine before distribution (Chute, 2000). Provision of laptops for every student will help to bridge the divide between the rich and the poor across the developing worlds (Witchalls, 2005). Exposing the poorer section of students to technology will better their quality of education, perhaps eliminating poverty and discrimination. B - IT Background Of The Issue A laptop is a portable computer composed of the same basic hardware, software and operating system as the desktop. A laptop, however, is much smaller and lighter than even the most compact desktop. ...read more.

However, a major problem is students using the laptops for something other than class work during school hours, hampering the education they receive. Schools have several complaints about this, such as student's multiplayer games over the wireless network available to them, using IM clients, e-mailing friends and many such distractions. Also, students and teachers will have to receive prior training before being issued laptops. A technical team will also have to be hired by the educational institutes to solve on-site issues as they occur. All these factors must be taken into consideration. The average laptop price in 2006 was about $1000. Incidentally, laptop manufacturers have been forced to lower prices due to rising demand from college-going students (Derlin, 2006). However, poorer sections of society might be unable to avail of this facility due to this hefty price tag. Hence, to avoid economic discrimination between the students, provisions for loans and programs should be made available to facilitate the purchase of laptops for each student. The main thing to realize is that a laptop classroom is actually incorporating two facilities into one. If teachers want to teach in the orthodox way, they can instruct students to turn off their laptops. When laptops are needed to facilitate the teaching process, they can be turned on. One can move seamlessly between these two scenarios and when implemented correctly, can be exploited to great advantage. ...read more.

Laptops outsell desktops for First Time. June 8, 2005 http://www.windowsitpro.com/Article/ArticleID/46663/46663.html (accessed 21 February 2007) Darlin, Damon. Timing The Electronics Market for the Best Deal on a new PC. May 27, 2006 http://www.nytimes.com/2006/05/27/technology/27money.html?ex=1306382400&en=1f252eb3420774b8&ei=5089&partner=rssyahoo&emc=rss (accessed 6 March 2006) Brodsky, Matthew. Are Laptops a Threat to Education? May 5, 2005 http://www.laptopical.com/04551-laptop-keyboard.html (accessed 2 March 2007) NCIP. Laptops and Students w/ Motor problems. Date Unknown. http://www2.edc.org/NCIP/library/laptops/yau.htm (accessed 2 March 2007) Levine, Lawrence. The Center for Teaching Excellence. Date Unknown. http://www.dean.usma.edu/cte/LaptopLevine.cfm (accessed 6 March 2007) Murph, Darren. Intel announces specs, production dates for Classmate PC. September 28, 2006 http://www.engadget.com/2006/09/28/intel-announces-specs-production-dates-for-classmate-pc/ (accessed 17 March 2006) NEWS ITEM - EXTRACT Students pursuing higher education may soon be provided with laptops going by the recommendations of the Oversight Committee. The committee headed by former Karnataka Chief Minister Veerappa Moily, which went into the issue of preparing a roadmap for the implementation of 27 per cent reservation for Other Backward Castes in higher educational institutions, has also suggested that teachers too should have laptops. "The committee feels that there is a need for a mindset change and it has to be accepted that the laptop should been seen as the entry device to get connected to the knowledge world in cyberspace," the committee said in its final report submitted to the Prime minister's Office. "Every student and every teacher should be given such a device on an ownership basis and the process should be facilitated by bank loans," the report said. Time has come and it is necessary to mandate and facilitate the purchase of personal computers and laptops for each student, it said ...read more.