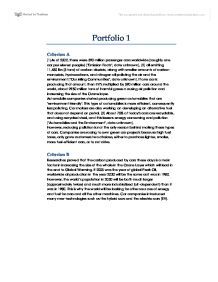 Portfolio 1 Criterion A [1]As of 2002, there were 590 million passenger cars worldwide (roughly one car per eleven people) ["Emission Facts", date unknown], [2] all emitting 11,450 lbs (5 tons) of carbon dioxide, along with smaller amounts of carbon monoxide, hydrocarbons, and nitrogen all polluting the air and the environment ["Our Ailing Communities", date unknown]. If one car is producing that amount, then if it's multiplied by 590 million cars around the world, about 2950 million tons of harmful gases causing air pollution and increasing the size of the Ozone layer. Automobile companies started producing green automobiles that are "environment friendly". This type of automobiles is more efficient, consequently less polluting. Car makers are also working on developing an alternative fuel that does not depend on petrol. [3] About 75% of today's cars are recyclable, and using recycled steel, and this lessens energy consuming and pollution ["Automobiles and the Environment", date unknown]. However, reducing pollution is not the only reason behind making these types of cars. Companies are racing to own green car projects because high fuel taxes, only gave customers two choices, either to purchase lighter, smaller, more fuel-efficient cars, or to not drive. Criterion B Researches proved that the carbon produced by cars these days is a main factor in increasing the size of the whole in the Ozone Layer which will lead in the end to Global Warming. ...read more.

[3] But DeCicco seems to have a different view; he stated that "none of the car companies are giving global warming any real consideration." [4] So there's still a debate behind the real reason of making these kind of technology that should be environmental friendly. Criterion C Green Cars afford business many advantages. Because as researches proved, oil would finish in almost 30 years, and so people would have to either, buy green autos or live without cars, which is impossible. Also, due to the expectations of the upcoming global worming that need s to be prevented, petrol cars will be banned in the future. Due to this, many people would rush to buy the green automobiles that shouldn't be very expensive. However, green cars are very hard and expensive to make, since they have very high technologies, so there price will be very high and many people won't afford it, and so they might turn back to petrol cars. Also having billions of petrol cars nowadays may cause a problem in business when the green cars are on for sale, petrol cars will not be needed since they cause air pollution and they might be restricted by higher authorities. So there will be so many petrol cars on for sale but no one to buy and so there price will highly drop while on the other hand, the price of green cars ...read more.