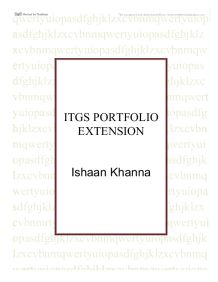 ITGS PORTFOLIO EXTENSION Ishaan Khanna Report Criterion N: Discussion And Analysis Of The Interview According to Mr.Paraskar, Wi-Fi technology has caught momentum in India in the last four years . In the year 2007, Wi-Fi spread widely in business and industrial sites. . Mr. Paraskar has been working in the cyber crime department for five years. He has come across various security problems in Wi-Fi networks such as hacking and received a large number of complaints based on this issue. Wi-Fi is used by most personal computer operating systems, video game consoles, laptops, smart phones and many other electronic devices. The popularity of this technology is increasing day by day and airports, hotels, restaurants are offering free Wi-Fi to attract customers and slowly Wi-Fi is replacing local area networks which require wires for connection to the internet. As far as security loopholes of Wi-Fi are concerned, many Wi-Fi users do not secure their Wi-Fi networks. This makes the Wi-Fi network accessible to any outsider who has a Wi-Fi enabled device anywhere near the Wi-Fi network. Mr. Paraskar said that hacking into Wi-Fi networks is a very serious issue and a great amount of damage can be caused as a result of compromise in Wi-Fi networks. ...read more.

Wi-Fi is gaining popularity and it is being widely used in airports, hotels, restaurants etc. therefore it is very important to take security measures in order to secure networks and prevent hacking of networks. Due to lack of experience and strong security measures Wi-Fi hacking is becoming more and more prominent. The large Wi-Fi systems at airports, hospitals should be password protected and so should small organizations to prevent misuse of their IP address by hackers. Higher methods of encryption should also be used to prevent hacking. SSID is the name of a wireless local area network and it is sent out by a router, SSID broadcasting should be turned off because if someone knows the SSID it is easier for them to gain access to your Wi-Fi network. Research Questionnare 1) When did Wi-Fi technology catch momentum in India? 2) How many years have you been in the home affairs department? 3) How familiar are you with the security problems inherent in Wi-Fi 4) What kind of security loopholes is a Wi-Fi network open to? 5) What kind of security loopholes is a Wi-Fi network open to? 6) What amount of damage could be caused as a result of compromise in the Wi-Fi networks? ...read more.

Cyber crimes do not need to have stronger security measures so that only criminals are punished. 7) What are the measures that need to be taken to prevent the tapping and misuse of Wi-Fi networks? Passwords should be set by the owners when they establish the Wi-Fi networks so that outsiders cannot gain access to network and misuse it. The password should be changed from time to time and It should be ensured that no hacking is taking place. If there is any problem or case of hacking it should be immediately reported to the cyber crime department. Or use high orders of encryption so that tapping into these networks would become more difficult and this would make network more secure 8)How do you view the crime rate in the nation after the tremendous growth in Wi-Fi networks in India? The crime rate has almost doubled with the growth of Wi-Fi networks because of hacking and misuse of Wi-Fi. Networks by hackers and the other reason is that many people are not aware of Wi-Fi security and how to protect their networks from getting hacked 8) What order of punishments is awarded to cyber criminals guilty of their crime? There is an information technology act of India, this act considers the crime and order is directly proportional to the crime. ...read more.