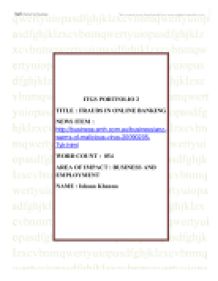 ITGS PORTFOLIO 2 TITLE : FRAUDS IN ONLINE BANKING NEWS ITEM : http://business.smh.com.au/business/anz-warns-of-malicious-virus-20090205-7ylr.html WORD COUNT : 854 AREA OF IMPACT : BUSINESS AND EMPLOYMENT NAME : Ishaan Khanna A: PRESENTATION OF THE ISSUE The Australia and New Zealand Banking Group Limited commonly called ANZ is the fourth largest bank in Australia after the Commonwealth Bank, the National Australia Bank, and Westpac Banking Corporation. [birgitdaube.de] ANZ is also the largest bank in New Zealand, where the legal entity became known as ANZ National Bank Limited in 2004 and where it operates two brands, ANZ and the National Bank of New Zealand. ANZ warned its customers to be careful of a fraudulent portal of a website that is generated by a virus which resides on a user's computer that generates a form which requests the account holder for personal details. The problem being faced is as follows: Trojan horses enter as attachments in the inbox of a user but once they are opened, they secretly install programs which cause great danger. ...read more.

Customers who accessed the banking portal lost important data. The Trojan horse stores personal data by planting malicious codes and scanning sequences of letters and numbers with a keyboard scanner. The data reaches the place where the hackers are operating from and they gain easy access to such private and confidential data. C: IMPACT OF THE ISSUE The Trojan horse also known as Trojan is a virus that appears to perform a desirable function but in fact performs secretive malicious functions which enable unauthorized access to the user's machine. [answers.com] This issue is not related specifically to ANZ Bank. It is related to all banks in general and this problem of hacking by Trojan horses can occur in various other banks as well. Customers will face severe losses if personal and sensitive information falls in the hands of hackers and this may eventually affect thousands of customers and the entire bank may shutdown due to disappointment of customers and loss of trust in the bank. ...read more.

To prevent the virus which could arrive with any attachment the bank recommended usage of advanced antivirus software. The bank issued a warning to its customers to be careful of changes on websites of banks. If there is any problem of any kind the customers should immediately call the company and ask for solutions to the problem. [theage.com] As a Trojan horse has many forms, there is no standardized way to delete them. The easiest responses used to clear temporary internet files and to delete them. Normally, antivirus softwares detect and remove Trojans, however if the virus cannot be found by the antivirus, booting the computer from other sources, such as a live CD, allow an antivirus program to delete a Trojan. Updated anti-spyware programs can also be of great use. Most Trojans also hide in registries, and processes. [answers.com] . Keys for generation of signatures and encryption can be stored on smartcards which depends on the concrete implementation. [pc1news. ...read more.