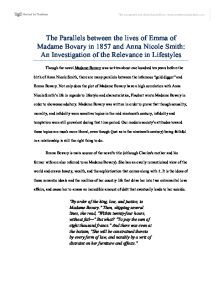 The Parallels between the lives of Emma of Madame Bovary in 1857 and Anna Nicole Smith: An Investigation of the Relevance in Lifestyles Though the novel Madame Bovary was written about one hundred ten years before the birth of Anna Nicole Smith, there are many parallels between the infamous "gold digger" and Emma Bovary. Not only does the plot of Madame Bovary have a high correlation with Anna Nicole Smith's life in regards to lifestyle and characteristics, Flaubert wrote Madame Bovary in order to showcase adultery. Madame Bovary was written in order to prove that though sexuality, morality, and infidelity were sensitive topics in the mid nineteenth century, infidelity and temptation were still prevalent during that time period. Our modern society's attitudes toward these topics are much more liberal, even though (just as in the nineteenth century) being faithful in a relationship is still the right thing to do. Emma Bovary is main source of the novel's title (although Charles's mother and his former wife are also referred to as Madame Bovary). ...read more.

Both the country and the bourgeois lifestyle are dull. For instance, Emma is surprised to see that aristocrats do not serve extravagant cuisines and beverages at their everyday meals as she'd prefer. For her, life should be an excitement-filled drama. Emma seeks out the extremes in life, both positive and negative. Unless she's experiencing some figurative peak of ecstasy, she's convinced that she's absolutely miserable. Her appetite for stimulation grows to the point where she becomes jaded enough not to appreciate the small pleasures in life, simply because they are small pleasures, and not the excitement-filled dramas to which were previously referred to. The more she experiences, the less she is satisfied with more normal activities. She needs thrill, excitement, something better than the status quo ante. Consider, for example, her taste in literature. She starts out with romances and bourgeois women's magazines targeted to her real social and economic position. From there she graduates to high-fashion women's magazines that advocate conspicuous consumption culminating in intensely romantic poetry. ...read more.

Emma wore very low cut blouses which showed cleavage, and signaled to her lovers that she was available and promiscuous. Anna Nicole Smith, however, was known for showing much more than cleavage and shoulders. Though Anna Nicole Smith also saw, financial trouble, similar to that which plagued Emma Bovary, the extravagant lifestyle was still available. However, the two seductresses shared one dangerous characteristic: the love for thrills. For Emma, she wanted sophistication so badly, that she had affairs with sophisticated men such that she could have this lifestyle, but Anna Nicole Smith's thrills were drugs. Alcoholism and drug abuse led to her rather tragic death in 2007. In conclusion, many of the same temptations that were prevalent in the mid-nineteenth century are still prevalent nowadays. Because some of the same temptations exist, many of the same consequences result, though the time periods are so different. There is no doubt that there is a definite relevance with regard to temptation in the mid-nineteenth and now. ...read more.