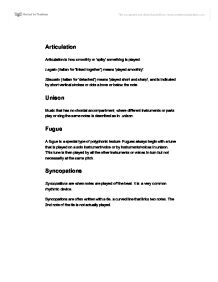 Articulation Articulation is how smoothly or 'spiky' something is played. Legato (Italian for 'linked together') means 'played smoothly'. Staccato (Italian for 'detached') means 'played short and sharp', and is indicated by short vertical strokes or dots above or below the note. Unison Music that has no chordal accompaniment, where different instruments or parts play or sing the same notes is described as in unison. Fugue A fugue is a special type of polyphonic texture. Fugues always begin with a tune that is played on a solo instrument/voice or by instruments/voices in unison. This tune is then played by all the other instruments or voices in turn but not necessarily at the same pitch. Syncopations Syncopations are when notes are played off the beat. It is a very common rhythmic device. Syncopations are often written with a tie, a curved line that links two notes. The 2nd note of the tie is not actually played. Time signatures Time signatures contain two numbers. * The top number indicates the number of beats in each bar. * The bottom number is a code for what the beat is measured in. Cadences A cadence is formed by two chords at the end of a passage of music. Perfect cadences sound like the music has come to an end. Interrupted cadences are 'surprise' cadences. You think you are going to hear a perfect cadence, but you get a minor chord instead. Imperfect cadences sound unfinished. They sound like they want to carry on to complete the music properly. Plagal cadences sound finished. The two chords have one note in common. Plagal cadences are often used at the end of hymns and sung to A-men Phrasing A phrase is like a musical sentence. When you talk, you take a breath after a sentence. With a musical phrase, you can almost hear a breath at the end of the phrase even when the music is played by non wind instruments. ...read more.

A fairly long work in several movements e.g. Moonlight Sonata by Beethoven. * Programme music: a composition for orchestra based on a story or a particular idea. * Dances: new folk dance forms were introduced, partly as a result of the interest in nationalist musical styles. The Waltz was a dance in 3/4 time; the Polka a round dance in 2/4 time; the Mazurka was a Polish dance in 3/4 time. Vocal / Choral: * Opera: a wider range of subjects, and - in the case of Richard Wagner - much bigger in scale. * Lied (plural is Lieder): a German song (always sung in German). * Song cycle: a collection of Lieder. Styles: * Nationalist: music concerned with creating specifically national styles different from the dominant Austrian and German styles created by Beethoven, Schubert and others. Major composers include Dvorak and Greig. * Impressionist: a style which sets out to create a sensory impression, often of aspects of the natural world (e.g. La Mer by Debussy). Expansion of the orchestra It was the demands of Beethoven's symphonies that brought about the dramatic expansion of the orchestra during the Romantic period. Beethoven's First Symphony is the real beginning of the modern orchestra. Note that in Beethoven's orchestra: * The keyboard instrument was replaced by strings. * The development of the valve meant that brass instruments now had greater range and flexibility. The symphony In the Romantic symphony: * The first movement is always fast (Allegro). * The second movement is usually much slower (Largo) and varies in mood. * The third movement is a Scherzo - energetic with strong rhythms and sometimes using folklore. * The fourth either imitates the first or contrasts it. Three important symphonic composers were Brahms, Tchaikovsky and Mahler. 20th Century art music The 20th Century was a time of great exploration and experiment in music. This unit will help you revise the main features of twentieth century 'art' music - ie music composed for the concert repertory rather than the pop music charts. ...read more.

These syllables are known as bol. * Lay: The tempo. The tempo may be slow (vilambit), medium (Madhya), or fast (drut). * Sam: This is the beginning of the cycle. The first beat of any cycle is usually stressed. * Avartan: This is the basic cycle. Drone: Drones are prominent in Indian music. * A drone is a sustained note(s) played throughout a section or through the entire piece of music. * Drone notes are usually the tonic and dominant notes, or the two notes in the raga that sound the strongest. Indonesian Gamelan Gamelan music comes from two of the Indonesian islands, Java and Bali. Some key features * Gamelan orchestra are usually percussion based (the word Gamelan means 'to hit with a hammer'). * Heterophony- a texture in which two or more voices or parts elaborate the same melody simultaneously, often the result of improvisation, and is often heard in Gamelan music. * Some varieties feature bamboo flutes (suling), bowed strings (rebab), or vocalists in a prominent role. * Other instruments include mettallophones, gongs, cymbals and drums. They are often very ornate and brightly painted. * The Indonesia double-headed drum is called a kendang. Players sit cross-legged on the floor and with drum resting horizontally across their lap. Sometimes the drum sits in a frame. The drummer has a very important role as they direct all the other players using special signals on the drum, so they know when to speed up, slow down, change tune or finish a particular section. Key musical features: Gamelan Indonesian music does not have the same scales as Western music, and is rarely written down. Here are some other key points: * Gamelan music often consists of tunes that are played over and over again (cyclic melodies). * Typically, a fast interlocking pattern (played on the pemade and the kantil) is layed over the melodic patterns played on the ugal. * Western musicians who wish to perform Gamelan use a number notation system instead of the Western staff notation. ...read more.