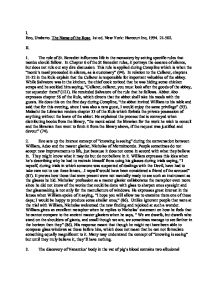 Name of the Rose Analysis Questions

I. Eco, Umberto. The Name of the Rose. 1st ed. New York: Harcourt Inc, 1994. 21-502. II. 1. The role of St. Benedict influences life in the monastery by setting specific rules that monks should follow. In Chapter 6 of the St Benedict rules, it portrays the essence of silence, but does not rule out any dire discussion. This rule is applied during Compline which is when the "monk's meal proceeded in silence, as is customary" (94). In relation to the Cellarer, chapters 31-32 in the Rule explain that the Cellarer is responsible for important valuables of the abbey. While Salvatore was in the kitchen, the chief cook noticed that he was hiding some chicken scraps and he scolded him saying, "Cellarer, cellarer, you must look after the goods of the abbey, not squander them!"(121). He reminded Salvatore of the rule that he follows. Abbot Abo expresses chapter 56 of the Rule, which directs that the abbot shall take his meals with the guests. He does this on the first day during Compline, "the abbot invited William to his table and said that for this evening, since I was also a new guest, I would enjoy the same privilege" (93). ...read more.

Jorge's support to his argument is that "Christ did not laugh" (132) because there is no scripture in the bible stating that he did and that "laughter is something very close to death and to the corruption of the body" (96). Both make compelling arguments but William never showed doubt in what he was saying unlike Jorge who insulted William in Latin saying, "Tum podex carmen exulit horridulum" (130) which meant "Then this asshole let out a vulgar sound." William realized that the old man was set in his ways and was not only blinded physically but blinded mentally and he decided to humble himself saying, "Perhaps what you say is correct, and I was mistaken (134). 5. There is an apparent allusion found between William and Adso's attempt to solve the problem of gaining entrance to the Finis Africae, Edgar Allan Poe's "The Gold Bug", and Sir Arthur Conan Doyle's "Adventures of the Dancing Men". The reference being that all three are mysteries that needed code deciphering. William expresses, "Bacon was right in saying that the conquest of learning is achieved through the knowledge of languages" and "The best treatises on cryptography are the work of infidel scholars" (Eco 165). ...read more.

7. Umberto Eco utilizes Salvatore's wild accounts and Adso's dream to express his purpose for writing "The Name of the Rose". "Penitenzaiagite! Watch out for the draco who cometh in futurum to your anima! Death is super nos! Pray the Santo Pater come to liberar nos a male and all our sin!" (46). This translates to, "Repent! Watch out for the dragon who cometh in future to gnaw your soul! Death is upon us! Pray the Holy Father come to free us from evil and all our sin!" (Key 103-104). Salvatore's frenetic language symbolizes Eco's purpose of conveying that life is sometimes not easy to understand or put together but may sometimes take some time to stop and think before making a move. Adso dreams of fantasies that seem nonsensical thought through these confusing dreams the author's purpose was once again portrayed. "And in the fog of the soul, finding myself as if in a region not of this world, I had a vision, or dream, if you prefer to call it that" (427). William manages to take what was once a confusing dream into an important factor to solving the mystery. This proves that sometimes what may seem irrelevant and confusing at first may actually be apart of something more than just nonsensical ideas. ...read more.