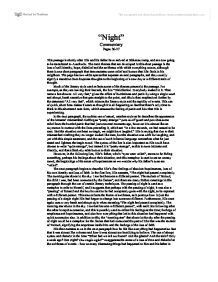 "Night" Commentary Pages 36-37 This passage is shortly after Elie and his father have arrived at Birkenau camp, and are now going to be transferred to Auschwitz. The main themes that are developed in this short passage is the loss of self-identity, hope, disbelief and the swiftness with which everything occurs, although there is one short paragraph that demonstrates some relief and humor that Elie finds in his neighbors. The page has two white spaces that separate several paragraphs, and they usually signify a transition from hopeless thoughts to the beginning of a new day or a different train of thought. Much of the literary style used reflects some of the themes present in the passage. For example, as they are leaving their barrack, the line "Disinfection. Everybody soaked in it. Then came a hot shower. All very fast," gives the effect of hurriedness and panic by using a single word and abrupt, harsh narrative that gets straight to the point, and this is then emphasized further by the statement "All very fast", which mirrors the literary style and the rapidity of events. ...read more.

The next paragraph begins to describe Elie's first feelings of absolute hopelessness, loss of his own identity and loss of faith. In the first line, Elie narrates, "The night had passed completely. The morning star shone in the sky. I too had become a different person. The student of Talmud, the child I was, had been consumed by the flames", and there are many hidden meanings in this paragraph through the use of certain literary techniques. The passing of night is used as a metaphor to refer to himself, and it suggests that perhaps with the passing of night, it was also a "passing" of himself and the boy he used to be had completely gone with the night, to be replaced with a different person. This also reflects the theme of swiftness, as it portrays how in just the passing of a single night Elie had begun to change into someone different. Furthermore, Elie once again uses a very harsh and abrupt style when narrating "The night had passed completely. ...read more.

Lastly, following after this use of tautology, Elie simply writes "Surely it was a dream" as a single line beneath the previous paragraph, which is then separated from the next paragraph by a white space, and this not only suggests how Elie feels lost and alone, but it's also like a statement to reassure himself that nothing has happened and he's really just dreaming it all up. The use of white space directly after this single statement suggests a shift from one train of thought to another, or the emergence from his reverie of disbelief as the next paragraph is still in the same day but on a different subject. It also puts into perspective how terrified he feels about such a dramatic shift in his life happening in such a short time. In conclusion, Elie uses many different literary techniques and styles such as the abrupt, almost note form of narrative, metaphors, rhetoric, tautology and the use of white space to depict his experiences and his feelings of emptiness, loss of identity and faith, and disbelief in everything that's happened. By: Samantha Word Count: 1,032 ...read more.