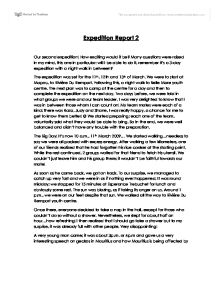 Expedition Report 2 Our second expedition! How exciting would it be? Many questions were raised in my mind, this one in particular: will I be able to do it, remember it's a 3-day expedition with a night walk in between? The expedition was set for the 11th, 12th and 13th of March. We were to start at Mapou, to Rivi�re Du Rempart. Following this, a night walk to Belle Mare youth centre. The next plan was to camp at the centre for a day and then to complete the expedition on the next day. Two days before, we were told in what groups we were and our team leader. I was very delighted to know that I was in between those whom I can count on! My team mates were each of a kind; there was Raza, Judy and Shane, I was really happy, a chance for me to get to know them better! :) We started preparing; each one of the team, voluntarily said what they would be able to bring. ...read more.

5:30 p.m., it was diner time! We had Boiled noodles and of course it was very nice, it was cooked by a girl after all! :) We washed our utensils and packed our bags for the upcoming night walk. As we managed to do the cleanup at 7 p.m., we had a 2 more hours before continuing the walk. So we decided to relax and share some jokes and I guarantee time flies. The time is right...the night walk is up! How exciting, I cannot say. W walked from Rivi�re du Rempart to Belle Mare, it took us loads of time, about 6 hours; obviously with loads of rest time in between. But I got to admit, ever want to do an awesome trekking; at night, it's the best. :) We went through Roches Noire, following the old railway track, indeed at night; boys were a bit protective, showing the awareness of danger at any time. But still it was awesome. I got to know quite a lot of my new friend as we walked together through almost the whole expedition. ...read more.

Suddenly I heard some girls shouting and unfortunately, their tent was filled with water. Very lucky that some boys heard the noise and came running and we displaced their bags to the veranda. After 10 minutes, it happened again for another tent. All the team leaders and I called everyone in the veranda to make sure that they know about the situation. As the rain faded away, we went to check for the status of the tents and as gold participants, we gave priority to the silver ones so that they have a good tent. It was a miracle that only around 7 people, including me couldn't make it to a tent thus we slept in the toilet. So barely had over 2 or 3 hours of sleep. It's now 6 a.m. our supervisor came and felicitated us on our responsibility and organization as she saw us doing the job well and didn't have to intervene (we thought they were ASLEEP in the car). Unfortunately, the expedition had to end here because of the torrential rain through the night. It would have been too dangerous. What an unexpected tragedy! Who would have thought about it? Well that was my second expedition! :) ...read more.