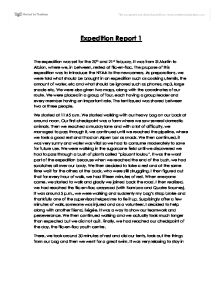 Expedition Report 1 The expedition was set for the 20th and 21st febuary. It was from St.Martin to Albion, where we, in between, rested at flic-en-flac. The prupose of this expedition was to introduce the NYAA to the newcomers. As preparations, we were told what should be brought in an expedition such as cooking utensils, the amount of water, etc and what should be ignored such as phones, mp3, large snacks etc. We were also given two maps, along with the coordinates of our route. We were placed in a group of four, each having a group leader and every member having an important role. The tent issued was shared between two or three people. We started at 11:45 a.m. We started walking with our heavy bag on our back at around noon. Our first checkpoint was a farm where we saw several domestic animals. Then we reached a muddy lane and with a lot of difficulty, we managed to pass through it, we continued until we reached the pipeline, where we took a good rest and I had an Alpen bar as snack. ...read more.

It was a way to show our teamwork and perseverance. We then continued walking and we actually took much longer than expected but we did not quit. Finally, we had reached our checkpoint of the day, the flic-en-flac youth centre. There, we took around 30 minutes of rest and did our tents, took out the things from our bag and then we went for a great swim. It was very relaxing to stay in the water and we did so for an hour. We also played some water games, until one of us was injured by a piece of broken glass found in the water. We then decided to leave. We got him some first aid and by that time, we had to start cooking our dinner. Around 7:30 p.m., we started cooking; we had mash potato, chicken sausages, baked beans and peas. The food was not to the best quality but still eatable. We then sat around and team members shared their experiences with each other. I was very happy, as I was a newcomer in the school as well, so I learned a lot about my teammates. ...read more.

Like yesterday, for every hour we walked, we had fifteen minutes of rest. At around midday, we stopped under a tree and had a little snack. From there we had only an hour or so of walking to the final destination. At around 1:30 p.m., we had reached the beach of Albion. It was the final checkpoint. There we had our final meeting and we discussed our strengths and weaknesses as well as strategies for such expedition. A victory for me, first time in my life I walked so much! I was very happy to see that the newcomers, even me, managed to complete this tiresome expedition. It was also seen that despite our effort to maintain good teamwork, we still had to work upon it. In addition, the amount of things that we brought can be reduced so that we can get the optimum weight. I was also glad to get some advices from a previous NYAA participant. And to conclude, I was proud and happy that I found a meaning for the expedition and I know I am given a chance to explore my abilities. ...read more.