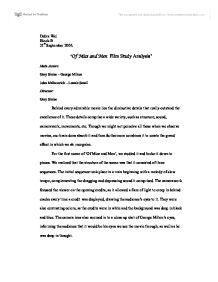 Of Mice and Men Film Analysis

Debra Wei Block B 21st September 2006. 'Of Mice and Men Film Study Analysis' Main Actors: Gary Sinise - George Milton John Malkcovich - Lennie Small Director: Gary Sinise Behind every admirable movie lies the diminutive details that really outstand the excellence of it. These details comprise a wide variety, such as structure, sound, camerawork, movements, etc. Though we might not perceive all these when we observe movies, our brain does absorb it and then furthermore combines it to create the grand effect in which we do recognize. ...read more.

They were also contrasting colors, as the credits were in white and the background was deep in black and blue. The camera lens also zoomed in to a close up shot of George Milton's eyes, informing the audience that it would be his eyes we see the movie through, as well as he was deep in thought. The start of the following sequence was determined when the soundtrack began to speed up to a more panicky and loud tempo, alongside a change in location, a field. As a lady was running through the field, her spotlight in this mid shot was clear as she was wearing a bright red dress and the setting around her was blurred. ...read more.

Since they were concealed behind grass, the camera would show strands of grass lowering from above while facing outside at the men. The last sequence began when the panicky music toned down to a calm tune, and the train noises interrupted the background. This took place in the train after Lennie's and George's runaway. The movement used was obviously inpoint/outpoint as the train audio connected them. Overall, I believe the opening scene was shot as a flashback because creating a flashback puts the audience in the situation, allowing them to feel the actual tension and approach, versus just hearing about it. I also feel that the movements, sounds, camerawork, etc., were executed the way they were due to the fact that it enhanced the situation furthermore. ...read more.