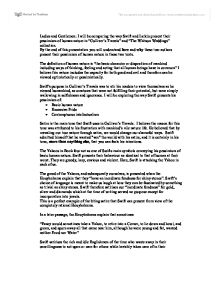 Ladies and Gentlemen: I will be comparing the way Swift and Larkin present their pessimism of human nature in "Gulliver's Travels" and "The Whitsun Weddings" collection. By the end of this presentation you will understand how and why these two authors present their pessimism of human nature in these two texts. The definition of human nature is "the basic character or disposition of mankind including ways of thinking, feeling and acting that all human beings have in common" I believe this nature includes the capacity for both good and evil and therefore can be viewed optimistically or pessimistically. Swift's purpose in Gulliver's Travels was to stir his readers to view themselves as he viewed humankind, as creatures that were not fulfilling their potential, but were simply wallowing in selfishness and ignorance. I will be exploring the way Swift presents his pessimism of: * Basic human nature * Excessive Pride * Contemptuous intellectualism Satire is the main tone that Swift uses in Gulliver's Travels. I believe the reason for this tone was attributed to his frustration with mankind's vile nature life. He believed that by revealing our true nature through satire, we would change our shameful ways. Swift admitted himself that he wanted "vex" the world with his satire, and it is certainly in his tone, more than anything else, that you can feels his intentions. The Yahoos in Book four act as one of Swifts main symbols conveying his pessimism of basic human nature. Swift presents their behaviour as identical to that of human at their worst. They are greedy, lazy, envious and violent. ...read more.

Swift may be satirizing himself as his attitude towards the changes going on around him during the period of enlightenment was one of distain. Below the city of Laputa, in Balnibarbi where seemingly normal people are oppressed by floating island above, theoretical knowledge has proven positively disastrous. It is explained to Gulliver that some Laputans came down to create vast collages to perfect their already functioning society. However, these academies result in the ruin of agriculture and architecture and stem the impoverishment of the population. A perfect example is the quote where Gulliver observes that: "In these Colleges, the Professors contrive new Rules and Methods of Agriculture and Building, whereby, one Man shall do the Work of Ten; a Palace may be built in a Week, with Materials so durable as to last forever without repairing. The only Inconvenience is, that none of these Projects are yet brought to Perfection; and in the mean time, the whole Country lies by miserably in waste" Overall, Swift presents his pessimism of contemptuous intellectualism through the Laputans as showing how change is not necessarily a good thing and highlighting all the dangers and limitations that abstract and theoretical knowledge have. That concludes my analysis of Swifts pessimism of human nature through using the Yahoos, Lilliputians and Laputans to expose those proud contemptuous figures of the state and to expose the true nature of mankind's: * Basic Human nature * Excessive Pride * Contemptuous intellectualism I will now present Larkin's pessimism of Human nature, mainly that of Human Failure and Basic Human nature drawing comparisons with Swifts presentation of pessimism. ...read more.

The second specific technique used throughout the Whitsun weddings collection is the use of Ambiguous language. It allows the reader to interpret what the meaning of the poem in many different ways. In Sunny Prestatyn; "Slapped up one day in March" acts as dark humour as it is ambiguous whether it is the poster being slapped onto a wall or the real girl being physically hit. The second example of ambiguous language is present in the last line: "Now Fight Cancer is there." Larkin leaves it up to the reader whether the cancer is the attitude of men who see women as objects, or whether it is this behaviour which is the cancer of humanity, or more likely; is the cancer a metaphor for the cancer in society such as the advertising industry? Larkin as always brings the harsh reality back to the reader at the end. Swift also believes in this cancer of society, evident in his description of the twisted society of each of the places he visited. In conclusion, I believe that Swift and Larkin were two people perturbed by to human condition, however, what they believe is so pessimistic about the human condition is its capacity to lie. Swift satirises contemptible figures who are oblivious to their own shortcomings and Larkin shows through his poetry how he detests humans ideals (pause), such as the unobtainable ideals of Prestatyn promoted in the poster or the ideals of Faith Healing that is merely American quackery or that lie that we lead when we dismiss failure to luck or chance as seen in "As bad as a mile". They wanted to show that we are Human and we are bound by our nature. And we must accept that human nature is never and will never be perfect. ...read more.