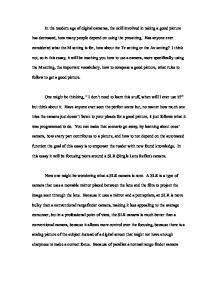 Photography SDS SDS 10 Canic Ng In the modern age of digital cameras, the skill involved in taking a good picture has decreased, how many people depend on using the presetting. Has anyone ever considered what the M setting is for, how about the Tv setting or the Av setting? I think not, so in this essay, it will be teaching you how to use a camera, more specifically using the M setting, the important vocabulary, how to compose a good picture, what rules to follow to get a good picture. One might be thinking, " I don't need to learn this stuff, when will I ever use it?" but think about it. Have anyone ever seen the perfect scene but, no matter how much one tries the camera just doesn't listen to your pleads for a good picture, it just follows what it was programmed to do. You can make that scenario go away, by learning about ones'your camera, how every part contributes to a picture, and how to not depend on the automated function the goal of this essay is to empower the reader with new found knowledge. In this essay it will be focusing more around a SLR (Single Lens Reflex) camera. Now one might be wondering what a SLR camera is now. A SLR is a type of camera that uses a movable mirror placed between the lens and the film to project the image seen through the lens. Because it uses a mirror and a pentaprism, an SLR is more bulky than a conventional rangefinder camera, making it less appealing to the average consumer, but in a professional point of view, the SLR camera is much better than a conventional camera, because it allows more control over the focusing, because there is a analog picture of the subject instead of a digital screen that might not have enough sharpness to make a correct focus. ...read more.

and how exposed the picture will be, this setting allows the photographer take a picture with the desired f-stop, without having the photographer adjust the shutter for a proper exposure. There is also another setting called Tv, which is shutter priority, where the camera sets it's own setting according to the shutter speed that the, user had set, this allows the user to set the desired shutter speed for different effects, while lightening the load of information the user has to take in. In many cameras the setting may have different names because this essay is based on a Canon camera. For most SLR cameras the lenses normal cost way more than the lens, because normal the camera breaks down faster than a normal lenses. So if one decides to replace your old SLR oneyou shwouldd like to find a camera that is compatible with the lenses one already owns. When walking in to a camera shop it is better to walk in blind, ask a lot of questions, and let the salesman show you around, this will see if they know their stuff, did I mention ask a lot of questions? So how does one pick a good lens? In a normal 35mm film format, a 50mm lens would be the equivalent of what your eyes sees and is a 1:1 conversion, but on most digital SLR because of prices, and quality most of the digital SLR have a film conversion of 1.3x/1.6x and making a lower mm lens to be more telephoto than it would be than in a normal camera. When looking for a good camera lens one should first look at what kind of connection the camera uses to attach on to theiryour camera, hopefully they are compatible first, and then look for what effects or shots that theyyou want to take. There is no point in doing a portrait shot with a macro or wide angle lens, there are many different kinds of lenses they are ultra wide-angle zoom, standard zoom, telephoto, telephoto zoom, macro, tilt-angle lens, super telephoto etc. ...read more.

You can create depth in many ways having a large aperture that would narrow the amount of the picture that will be focused, by manipulating the things in focus, it will make a more 3D look in the picture. By having a foreground, a midground, and a background, it will make a picture with more depth than just having one or leaving out one of these categories. Lines are just lines until you actually bend them and move them a straight and vertical line is too plain and too normal, but if you bend them, then the sky is the limit. A "S" curve is pleasant to the eye and combining a "S" curve with it starting from one side and leading away from the picture, is quite a combination. Usually curved lines are much preferred than straight lines, and having lines leading off to the side is also a good thing to have. Shapes are just lines which are closed, to form a shape. The rule of the lines also applies to shapes, lines that have curves, is better than straight lines. Shapes can be more constructive than lines because of the shapes have more than one way of looking at it. In the modern age of digital cameras, the skill involved in taking a good picture has decreased. But I hope that this essay might have given you an insight to the expansive world of photography. There is a growing number of people that is starting to use a S.L.R. camera because the age of digital camera, letting people take photo without having consequences which was involved in film such as developing and the cost of buying film and developing. This essay was meant to teach you about a camera and how to become a better photographer, but not to go out and buy a new camera, the camera you have now should beis sufficient, it's much better to spend more time, and money with your family, a camera is only a camera, it's who that takes the picture that counts. ...read more.