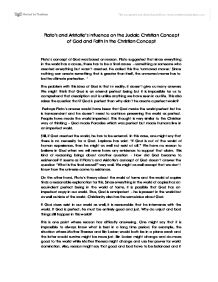 Platos and Aristotles Influence on Christianity

Plato's and Aristotle's Influence on the Judaic Christian Concept of God and Faith in the Christian Concept Plato's concept of God was based on reason. Plato suggested that since everything in the world has a cause, there has to be a final cause - something or someone who created everything but wasn't created. He called this the 'unmoved mover.' Since nothing can create something that is greater than itself, the unmoved mover has to be the ultimate perfection. ' The problem with this idea of God is that in reality, it doesn't give us many answers. We might think that God is an eternal perfect being but it is impossible for us to comprehend that description as it is unlike anything we have seen in our life. This also raises the question that if God is perfect then why didn't he create a perfect world? Perhaps Plato's answer would have been that God made the world perfect but he is transcendent and he doesn't need to continue preserving the world as perfect. ...read more.

If God is perfect, he must be entirely good and just. Why do unjust and bad things still happen in this world? This is one point where reason has difficulty answering. One might say that it is impossible to always know what is best in a long time period. For example, the situation where Mother Theresa and Bin Laden would both be in a plane crash and the latter would survive might be more just. Bin Laden might change and do more good to the world while Mother Theresa might change and use her power for world domination. Also, reason might say that good and bad have to be balanced and it is impossible for us to see the balance because we can't judge the world objectively through our own perspective. Still, it is also reasonable to conclude that perhaps an eternal perfect being doesn't exist at all and just accept that we don't know the cause of the world. ...read more.

Although at first, Plato's concept of God doesn't seem to have many common characteristics with the Christian concept of God, there actually are many similarities. Both of the theories believe that god exists in our world as well as outside of our world, both believe that God is the final cause and both believe that God is perfect. However, neither of the theories is certain because the premises Plato used for his ideas are different from the ones we use today and the Christian concept is based on faith more than reason. On the other hand, atheism is just as much based on faith as Christianity. Atheists believe that scientists are telling the truth while Christians believe that the Bible is the word of the God. In my opinion, the concept a person has of God shouldn't influence the way he sees life and the way he treats people because we are unable to find the truth out for ourselves anyway. Also, believing in God doesn't make better people because God's word may be interpreted in many different ways. ?? ?? ?? ?? ...read more.