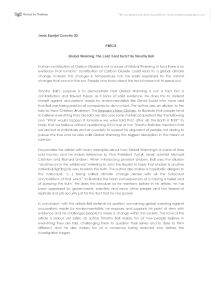 Jes�s Espejel Concha 3D PR�CIS Global Warming: The cold, hard facts? By Timothy Ball Human contribution of Carbon Dioxide is not a cause of Global Warming. In fact there is no evidence that humans' contribution of Carbon Dioxide could lead to a global climate change, instead, this changes in temperature can be easily explained by the natural changes that occur in the sun. People who know about this fact choose not to speak out. Timothy Ball's purpose is to demonstrate that Global Warming is not a fact but a contradictory and flawed theory as it lacks of solid evidence. He does this to defend himself against accusations made by environmentalists like David Suzuki who have said that Ball was being paid by oil companies to deny a fact. The author uses an allusion to the tale by Hans Christian Andersen, The Emperor's New Clothes, to illustrate that people tend to believe everything they are told. He also uses some rhetorical questions like the following one "What would happen if tomorrow we were told that, after all, the Earth is flat?" to imply that we believe without questioning if it is true or not. Timothy Ball also mentions that we are lost as individuals and as a society to support his argument of people not daring to pursue the true and he also calls Global Warming the biggest deception in the history of science. ...read more.

The author, Tom Harris, does this to support his skeptic point of view concerning global warming. To demonstrate his position, he begins by quoting a phrase from Al Gore's film; "Scientists have an independent obligation to respect and present the truth as they see it," and then Harris continues by asking the ironic question "With that outlook mind, what do world climate experts actually think about the science of his movie?" in which he implies that the so called by him dramatic film lacks of real science and that real scientists do not actually believe in Global Warming and its consequences. With this being said, he continues to name some of the scientists who support his belief and who according him are real scientists that really understand nature. Later on, he uses an irony "Here is a sample of the side of debate we almost never hear" to provide evidence about the main subject of exhaustive argument, C02 levels and earth's temperature. He again talks about the solid evidence presented by different individuals and all the criticism they have made against the misleading film by Al Gore, An Inconvenient Truth, where he uses the expression "Carter does not pull his punches about Gore's activism" to show the striking amount of evidence against Al Gore. ...read more.

He mentions the explanations of several individuals and centres such as Professor Don Easterbrook, The UK Met Office's Hadley Centre and Mojib Latif to make clear both points of view and to maintain a neutral position. He uses the expression "To confuse the issue even further" to show how controversial and contradictory this topic can be and he concludes by ironically saying that "One thing is for sure. It seems the debate about what is causing global warming is far from over. Indeed some would say it is hotting up." In which he implies that the debate is getting even tighter. In conclusion, Hudson tries to show us both sides of Global warming, the skeptical view and the non-skeptical view maintaining a neutral position. In his mock-serious-written article he is able to give a brief but concrete summary of all the debates that are occurring throughout the world. This is a global issue and it is therefore part of the international agenda, it is obvious that it will cause controversy since it relates many aspects of today's world. Halting the climate change requires lots of work from all state and non-state actors, and this article does an outstanding work at explaining the different positions so that the reader has enough information in order to decide what his or her point of view will be. REFERENCE Hudson, P. (2009, October 09). BBC NEWS. Retrieved February 17, 2010, from http://news.bbc.co.uk/2/hi/8299079.stm ...read more.