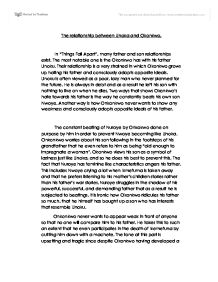 Relatinshipe between father and son in things fall apart

The relationship between Unoka and Okonkwo, In "Things Fall Apart", many father and son relationships exist. The most notable one is the Okonkwo has with his father Unoku. Their relationship is a very strained in which Okonkwo grows up hating his father and consciously adopts opposite ideals. Unoku is often viewed as a poor, lazy man who never planned for the future. He is always in debt and as a result he left his son with nothing to live on when he dies. Two ways that shows Okonkwo's hate towards his father is the way he constantly beats his own son Nwoye. ...read more.

The fact that Nuroye has feminine like characteristics angers his father. This includes Nwoye crying a lot when Ikmefuma is taken away and that he prefers listening to his mother's children stories rather than his father's war stories. Nuroye struggles in the shadow of his powerful, successful, and demanding father that as a result he is subjected to beatings. It is ironic how Okonkwo ridicules his father so much, that he himself has bought up a son who has interests that resemble Unoku. Onkonkwo never wants to appear weak in front of anyone so that no one will compare him to his father. ...read more.

The thought of Okonkwo being similar to his father in anyway haunts him. Again, Okonkwo can stand the sight of the blood in contrast to his father who is a afraid of it. Onkokwo does not believe in anything that he perceives to be "soft", such as conservation and emotion. To say that the father and son relationship exists between Okonkwo and Unoka is impossible. He does not look up to his father in any way. Okonkwo grows up not wanting to be anything like his father and so explains why Okonkwo adopts a harsh approach in all situations. Unoka is an example of a complete failure as he is always in huge debts and leaves his son with nothing to live on. Unoka fails to be the right father for Okoknwo. ...read more.