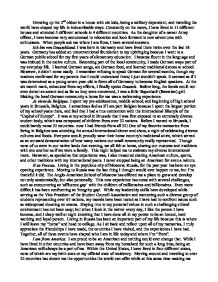 Growing up the 2nd oldest in a house with six kids, being a military dependent, and traveling the world have shaped my life in indescribable ways. Constantly on the move, I have lived in 11 different houses and attended 5 different schools in 4 different countries. As the daughter of a career Army officer, I have become very accustomed to relocation and look forward to new adventures with enthusiasm. When people ask me where I am from, I have several answers. Ich bin von Deutschland. I was born in Germany and have lived there twice over the last 18 years. Germany has added an unconventional foundation to my upbringing because I went to a German public school for my first years of elementary education. I became fluent in the language and was imbued in the native culture. Becoming part of the local community, I made German ways part of my everyday life. ...read more.

Though none of us were in our native lands that evening, we all felt at home, sharing our customs and traditions with one another as if we were a family. This night helped me to embrace my diverse international roots. However, as special as that experience was, I also treasured sharing American culture, sports, and other traditions with my international peers. I never stopped being an American for even a minute. ? ?? ??????. Living in the populous city of Moscow, Russia, for the past year has been an eye opening experience. Moving to Russia was the last thing I thought would ever happen to me, but I'm thankful it did. The Anglo-American School of Moscow has offered me a place to grow and develop not only academically, but also personally. This new experience has come with several challenges, such as encountering an 'affluence gap' with the children of millionaires and billionaires. ...read more.

While I appreciate my international friends and their cultures, I'm thankful to call America my home every day of my life. In spite of some shortcomings, America is the greatest country on earth-the more I travel, the more certain of this I become. Belonging to such a great nation is a privilege that I treasure as I proudly represent the red, white, and blue here in Europe. It might be the sweet childhood memories of living in North Carolina for four and a half years or maybe visiting my grandparents (both State alums) there every summer, but I consider North Carolina my home in the United States. Being able to join my older brother at NC State would allow me to make it my new home again. I realize that NC State would be a tremendous place for me to grow and learn over the next four years, as well as a place I could contribute. I look forward to those opportunities. ...read more.