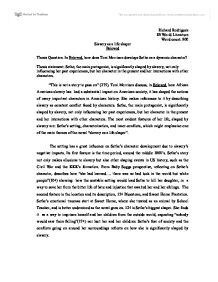 Slavery as a life shaper

nor hurt her and her children. Sethe's fear of society and the conflicts going on around her surroundings reflects on how she is significantly shaped by slavery. Sethe is the most influential and complicated characters, her personality is significantly shaped as result of the terrors of slavery. She becomes a strong and independent character as she is viewed Paul D as "the prickly, mean eyed sweet home girl he knew ...obedient, shy, and worked crazy like Halle"(142). She is described as a mean eyed woman, but slavery became a force that opened her mind up to what she only had control over. Her children became her main priority, and their protection becomes her main conflict, after her milk is stolen by the nephews. Then, as she is whipped a new being grows along with her scar that "School Teacher made one open in her back, and when it closed it made a tree."(17). This demonstrates how schoolteacher's abuse over Sethe physically affects her further character development. ...read more.

she excuses her actions by explaining she would rather kill her children than hand them over to School Teacher. Yet, theses actions would lead Sethe to further conflicts: her two sons running away, a community that rejects her for eighteen years, and Beloved's haunting of 124. Sethe's constant suffering demonstrates how the conflict of slavery shaped her actions in the present and her interactions with other characters Deaths, separation, avoidance, all of these are results of slavery and character's refusal to it. Toni Morrison demonstrates how slavery has a negative impact not only on Sethe, but all other characters surrounding her. Morrison also uses Sethe to focus on the possible theme of the novel "slavery as a life shaper" with complement of "This is not a story to pass on" to prevent us from slavery and the burden "sixty million and more" slaves had to carry for entire generations as it is reflected through out the novel. The idea that one is shaped strongly by event in our lives such as slavery is not only apparent in this book, but in every day life. We are constantly changing as a society to reflect in our conflicts. ...read more.