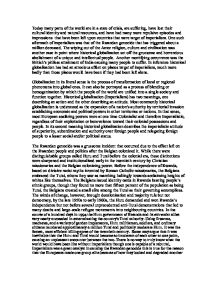 Today many parts of the world are in a state of crisis, are suffering, have lost their cultural identity and natural resources, and have had many more repulsive episodes and impressions that have been left upon countries that were target of imperialism. One such aftermath of imperialism was that of the Rwandan genocide that has triggered about a million deceased. The wiping out of the Aztec religion, culture and civilization was another case in point where historical globalization set off the gruesome and horrendous abolishment of a unique and intellectual people. Another mortifying occurrence was the British's pitiless attainment of India causing many people to suffer. In inference historical globalization has had an atrocious effect on places target of imperialism, much more badly than those places would have been if they had been left alone. Globalization in its literal sense is the process of transformation of local or regional phenomena into global ones. It can also be portrayed as a process of blending or homogenization by which the people of the world are unified into a single society and function together. Historical globalization (Imperialism) has two meanings, one describing an action and the other describing an attitude. Most commonly historical globalization is understood as the expansion of a nation's authority by territorial invasion establishing economic and political powers in other territories or nations. ...read more.

The depletion of the Aztec religion, culture and civilization was another case in point where historical globalization triggered a gruesome abolishment of a unique and intellectual people. The Spanish conquest of the Aztec Empire was one of the most important campaigns in the Spanish colonization of the Americas. The invasion began in February 1519 and was achieved on August 13, 1521 by conquistadors led by Hern�n Cort�s. It appears that Cort�s' intention was to maintain the basic structure of the Aztec empire under his leadership, and at first it seemed the Aztec empire would survive. The upper Aztec classes, at first, were considered as noblemen, they learned Spanish, and several learned to write in European characters. Also, the first missionaries tried to learn Nahuatl and some, like Bernardino de Sahag�n, decided to learn as much as they could of the Aztec culture. To pay off the Spanish army that captured Mexico, the system known as encomienda, became a system of oppression and exploitation of natives, although its originators may not have set out with such intent. Due to some horrifying instances of abuse against the indigenous peoples, Bishop Bartolom� de las Casas suggested importing black slaves to replace them. Bartolom� later repented when he saw the even worse treatment given to the black slaves. The other discovery that perpetuated this system was extensive silver mines discovered at Potosi, in Peru and other places that were worked for hundreds of years by forced native labor and contributed most of the wealth that flowed to Spain. ...read more.

The conquest of India was done for the resources in India such as spices, textiles, gold, precious gems, large population and large source of land. Through the conquest of India there was much bloodshed for example the Mughal Empire was destroyed and the Mughal people were killed many fled to survive, this led to the loss of the Mughal culture. During the British Raj, famines in India, often attributed to government policies, were some of the worst ever recorded, including the Great Famine of 1876-78, in which 6.1 million to 10.3 million people died and the Indian famine of 1899-1900, in which 1.25 to 10 million people died. It may be argued that colonization in India was inevitable though India had a strong government and could have survived well without being colonized. By all the information above it can be perceived that historical globalization was a negative force. Though historical glovalization caused much greif, places affected by imperialism are moving forward some may take longer to heal and recover and others may not but the reality of it all is that the imprint left by historical globalization can not be removed. Despite this fact the world today is percieved as unique and distinctive because of all the events that have taken place whether good or bad it has changed us and made us more rounded unique people. In inferance historical globalization has left an irreversible mark on the world and has changed everyone who lives on the world whether they were apart of imperialism or not. ...read more.