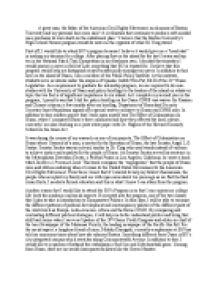 ﻿A great man, the father of the American Civil Rights Movement, an alumnus of Boston University and my personal hero once said ?A civilization that continues to produce soft-minded men purchases its own death on the installment plan.? I believe that the Boston University?s High-School Honors program would do unto me the opposite of what Dr. King stated. First off, I would like to attend BU?s program because I believe it would give me a ?head-start? in making my decision for college. After placing first on the island for the last 3 years and top ten in the National Mock-Trial Competition in my freshmen year, I decided that someday I would pursue a career in field of Law, something that BU is reputed for. I believe that this program would help me distinguish myself academically amongst my peers. ...read more.

Hughes of the Harvard Kennedy School on the Jones Act. It was during the course of my research on one of my projects, The Effect of Colonization on Guam where I learned of a man, a martyr for the liberation of Guam, the late Senator Angel L.G. Santos. Senator Santos was an activist, similar to Dr. King who used words instead of violence to achieve justice and equality for the people of Guam. As Senator Santos served his sentence in the Metropolitan Detention Center, a Federal Prison in Los Angeles, California, he wrote a book titled Death in a Promised Land. This book compares the ?segregation? that the people of Guam were and still are enduring when it comes to the United States Government to the American Civil Rights Movement. ...read more.

Speaker of the 29th Guam Youth Congress and editor-in-chief of the teen Newspaper of the Marianas Variety, the leading newspaper of the Pacific this fall. For the social aspect, a longtime friend of mine, Melody Kamigaki, currently a sophomore at BU has told me numerous times about how she admires Boston. Something different from Guam is BU?s city-integrated campus which stretches along Commonwealth Avenue. In addition to that, I would like to experience firsthand the enthusiasm a Red Sox and Celts baseball game. Coming from Guam, there are no world class sports facilities like the Green Monster. I hope I do get to experience this summer at Boston University. I believe BU will be the perfect fit for me considering the field that I plan to pursue. What better place is there to learn about revolution and freedom, than the birthplace of revolution, heart of freedom and cradle of liberty? ...read more.