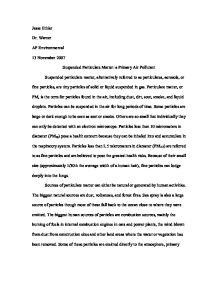 Jesse Ethier Dr. Warner AP Environmental 13 November 2007 Suspended Particulate Matter: a Primary Air Pollutant Suspended particulate matter, alternatively referred to as particulates, aerosols, or fine particles, are tiny particles of solid or liquid suspended in gas. Particulate matter, or PM, is the term for particles found in the air, including dust, dirt, soot, smoke, and liquid droplets. Particles can be suspended in the air for long periods of time. Some particles are large or dark enough to be seen as soot or smoke. Others are so small that individually they can only be detected with an electron microscope. Particles less than 10 micrometers in diameter (PM10) pose a health concern because they can be inhaled into and accumulate in the respiratory system. Particles less than 2.5 micrometers in diameter (PM2.5) are referred to as fine particles and are believed to pose the greatest health risks. ...read more.

The composition of suspended particulate matter depends on their sources. Wind-blown mineral dust tends to be made of mineral oxides and other material wind blown from the Earth's crusts. Sea salt consists mainly of sodium chloride originated from sea spray; other constituents of atmospheric sea salt reflect the composition of sea water. In addition, sea spray aerosols may contain organic compounds, which influence their chemistry. the smaller and lighter a particle is, the longer it will stay in the air. Also, larger particles tend to settle to the ground by gravity in a matter of hours where as the smallest particles can stay in the atmosphere for weeks and are mostly removed by precipitation. The most concentrated particulate matter pollution tends to be in densely populated metropolitan areas in developing countries. The primary cause is the extreme level of the burning of fossil fuels by transportation and industrial sources in these densely populated areas. ...read more.

There is also some evidence that particles smaller than 100 nanometers can pass through cell membranes which could potentially cause damage to the brain. It has been suggested that particulate matter can cause similar brain damage as that found in Alzheimer patients. The large number of deaths and other health problems associated with particulate pollution was first demonstrated in the early 1970's and has been reproduced many times since. Particulate matter pollution is estimated to cause 22,000-25,000 deaths per year in the United States. Many technologies and industrial processes have been created to attempt to reduce suspended particulate matters. BlueTec is a technology developed to reduce particulate emissions from diesel engines in order to meet the stringent Californian standards. BlueTec is Daimler AG's name for its two nitrogen oxide reducing systems, for use in their Diesel automobile engines. One is a urea-based reluctant, the other is called DeNOx and uses an oxidizing catalytic converter and particulate filter combined with other nitrogen oxide reducing systems. Both systems were designed to reduce pollutant emissions. ...read more.