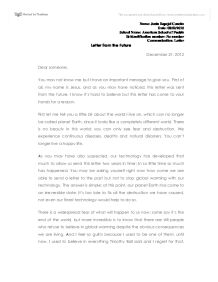 Letter from the Future December 21, 2012 Dear someone, You may not know me but I have an important message to give you. First of all, my name is Jesus, and as you may have noticed, this letter was sent from the future. I know it's hard to believe but this letter has come to your hands for a reason. First let me tell you a little bit about the world I live on, which can no longer be called planet Earth, since it looks like a completely different world. There is no beauty in this world; you can only see fear and destruction. We experience continuous diseases, deaths and natural disasters. You can't longer live a happy life. ...read more.

And I feel so guilty because I used to be one of them, until now. I used to believe in everything Timothy Ball said and I regret for that. He was pretty sarcastic about how people tend to believe in everything they are told and about people not pursuing the truth. His words were strategically thought to grab people's attention, and he grabbed mine; I didn't wanted to be one of those persons not daring to purse the truth. He said global warming wasn't due to human contribution of C02 and that it was just a waste of time and of money. He was so convincing that he made me believe Global Warming wasn't a matter of attention. ...read more.

Tim Ball called himself a real scientist who really understood what was happening and who wanted others to know the truth. I felt so bad for him because he said he was being oppressed just for speaking up and that no one was listening to him, so I felt I was in the duty to help him spread his words. I taught others the "flawed science" behind Global Warming and I even began calling myself a scientist. This is the reason why I wrote this letter, dear stranger; Global Warming is an issue that needs to be taken seriously. You still have time not to halt but to reduce the effects of Global Warming and to live a better future than the one I am living. Two years of hard work can change humanity. That's why, dear stranger, I beg you to take action; not for me, but for you and for your peers. ...read more.