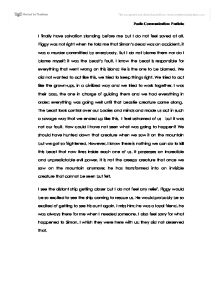 SWA lord of the flies

I finally have salvation standing before me but I do not feel saved at all. Piggy was not right when he told me that Simon's dead was an accident, it was a murder committed by everybody. But I do not blame them nor do I blame myself; it was the beast's fault. I know the beast is responsible for everything that went wrong on this island; He is the one to be blamed. We did not wanted to act like this, we tried to keep things right. We tried to act like the grown-ups, in a civilized way and we tried to work together. ...read more.

I see the distant ship getting closer but I do not feel any relief. Piggy would be so excited to see the ship coming to rescue us. He would probably be so excited of getting to see his aunt again. I miss him; he was a loyal friend, he was always there for me when I needed someone. I also feel sorry for what happened to Simon, I whish they were here with us; they did not deserved that. As I remember their faces my heart starts to beat hardly and the coldness of a tear running through my cheek reminds me of how the beast had eaten our hearts leaving just an empty space he filled out with darkness. ...read more.

I look at Jack firmly; he is quiet. None of them seem excited. Although we are getting rescued, we will never get rescued from this beast that got inside each of us and that we will have to live with for the rest of our lives, I know. And I know he is here with me now, listening to every single word I think on. He wants me to hurt the other boys; he is telling me in a silent voice to kill Jack. He says Jack should suffer for everything he caused, he is telling me that Jack is responsible for everything, that he has to pay for trying to hurt me and steal my power and for disrupting the order we had. He says it is fair. Maybe he is right, I think as I watch the. ...read more.