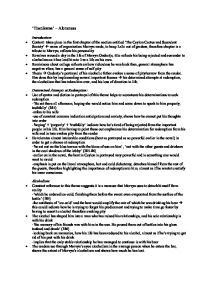 Thanikama - Running in the Family

'Thanikama' - Aloneness Introduction: * Context: takes place in the first chapter of the section entitled 'The Ceylon Cactus and Succulent Society' <-- name of organization Mervyn made, to keep Lalla out of gardens, therefore chapter is a tribute to Mervyn, reflects his personality * Revolves around a day in the life of Mervyn Ondaatje, title reflects his being rejected and surrender to alcoholism as it has lead him to live a life on his own. * Reminisces about college reflects on how ridiculous he was back then, general atmosphere has negative vibes, has a general sense of self pity * Thesis --> Ondaatje's portrayal of his alcoholic father evokes a sense of pity/sorrow from the reader. Has done this by implementing several important themes --> his determined attempts at redemption, the alcoholism that has taken him over, and his loss of direction in life. Determined Attempts at Redemption: * Use of syntax and diction in portrayal of this theme helps to accentuate his determinations to seek redemption -'He sat there all afternoon, hoping she would notice him and come down to speak to him properly, truthfully' (185) ...read more.

by having to resort to alcohol therefore evoking pity * The alcohol has shaped him into a man who has ruined his relationships, and his sole relationship is with his drink -'the memory of his friends was with him in the sun. He poured them out of bottles into his glass tankard and drank' (186) -looking back on memories, how his life has been reduced to his alcohol, almost as if he's trying to get rid of his past with his drink -implies that the only stable relationship he has managed to continue is with his beer * The readers see through Mervyn's eyes alcoholism in the average person when he enters the bar, shows the extent of Mervyn's alcoholism and shows how much he has lost. -'Drank and laughed, and listened, till eleven at night at which time they all went home to their wives' (186) '...all went home to their wives' implies that there were wives waiting for those men of the bar -emphasizes the consequences of going to his extent of alcoholism ...read more.

of pity for him * Michael Ondaatje gives the impression of his father that he has become a metaphorical empty eggshell, in that he is blank, empty, has no further substance -'Thinking. What was he thinking about? More and more he watched himself do nothing, with nothing.' (188) -this shows his general state of mind, in that he is not capable of further thinking, therefore painting a pitiful image of him. Conclusion: * Mervyn Ondaatje has turned from a pretty significant figure in the beginning of the book, to somewhat of an eggshell, something without much substance. * The reason this chapter is of significance is that the sense of sorrow/pity that it produces is so strong, it shows how travelling down the wrong path can have implications in so many different areas of one's life. * The author has successfully achieved his goal of portraying his father in a state in which he as surrendered to his severe alcoholism, but ultimately, creating pity for a man who unfortunately chose the wrong path in life. ...read more.