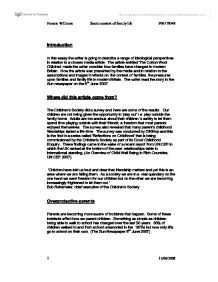 Introduction In this essay the writer is going to describe a range of ideological perspectives in relation to a chosen media article. The article entitled 'The Cotton Wool Children' made the writer consider how families have changed in modern Britain. How the article was presented by the media and in relation to the assumptions and images it reflects on the context of families, the pressures upon families and family life in modern Britain. The writer read the story in the Sun newspaper on the 6th June 2007. Where did this article come from? The Children's Society did a survey and here are some of the results. Our children are not being given the opportunity to 'play out' i.e. play outside the family home. Adults are too anxious about their children's safety to let them spend time playing outside with their friends; a freedom that most parents enjoyed themselves. The survey also revealed that many parent's childhood friendships lasted a life-time. The survey was conducted by GfKNop and this is the first in a series called 'Reflections on Childhood' that is being commissioned by the Children's Society as part of its Good Childhood Enquiry. These findings came in the wake of a recent report from UNICEF in which the UK ranked at the bottom of the peer relationships table in international standing, (An Overview of Child Well Being in Rich Countries, UNICEF 2007). ...read more.

On June 13th 2006 Lord Goldsmith QC quoted a case of a paedophile who had been sentenced to life imprisonment but was told later that he faced a minimum sentence of five years and 108 days. The sentence dismayed the victim's family - who described it as "an insult".(TIMES Online) How safe are they at home? Although over a period of three years the amount of children who have hurt themselves at home has decreased the figures are still very high. In 2000 798,708 children hurt themselves at home and by 2002 it was 708,972 (figures from the Royal Society of Prevention of Accidents). Outside the home the figures in 2000 were 244,634 and this had gone up by 2002 to 252,027. What did surprise me is the amount of children who hurt themselves at school, in 2000 it was 398,020 and in 2002 398,500 this is quite a lot of accidents when the children are meant to be being looked after by somebody else. According to statistics 15% of children are likely to have experienced sexual abuse by a member of the family or close friend rather than by a stranger. Also children who are always home are more likely to witness domestic violence or be a victim of domestic violence themselves compared to children who have periods playing or enjoying activities outside the home. ...read more.

The majority of decisions are initially made by parliament, a male dominated environment (472 male M.Ps, to 128 female M.Ps. www.parliament.uk/documents) e.g. the legal system and instructions handed down to local government. Many women remain at home to look after children and when they return to the workplace they find it difficult to climb the executive ladder; therefore in the majority of the work places, although there is equal opportunities legislation in place, major decisions are often made by men. Conclusion Although it is something that we all do, whether it's right or wrong is not something the writer can decide on. However if parents were able to give their children a chance to explore the environment safely, under supervision, it shouldn't affect them at all. Parents should also give children a chance to visit and stay with friends. However the writer does blame this situation on both the media, over- sensationalising the news, and the government not giving parents access to the sex offenders register, the government also sets the amount of time that offenders spend in prison. The writer would say that if sentences given to offenders against children were increased then maybe the trends would change again and parents would feel safer about the environment in which their children were able to play. ...read more.