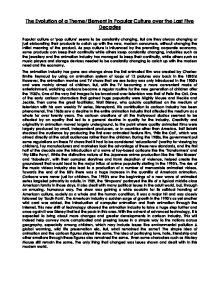 The Evolution of a Theme/Element in Popular Culture. Industries such as the jewellery and the animation industry has managed to keep their continuity, while others such as music players and storage devices needed to be constantly changing to catch up with

Popular culture or ‘pop culture’ seems to be constantly changing. But are they always changing or just elaborating their products to catch up with the new, modern consumers, without changing the initial meaning of the product. As pop culture is influenced by the prevailing corporate economy, some products can keep their continuity while others keep constantly changing. Industries such as the jewellery and the animation industry has managed to keep their continuity, while others such as music players and storage devices needed to be constantly changing to catch up with the modern need and the economy.

The animation industry has gone sea change since the first animated film was created by Charles-Emilie Reynaud by using an animation system of loops of 12 pictures way back in the 1890’s! However, the animation movies and TV shows that we see today was only introduced in the 1900’s and were mainly aimed at children. But, with the TV becoming a more convenient mode of entertainment, watching cartoons became a regular routine for the new generation of children after the 1930’s. One of the very first images to be broadcast over television was that of Felix the Cat. One of the early cartoon characters that gained huge popularity were Mighty Mouse and Heckle and Jeckle. Then came the great facilitator, Walt Disney, who quickly capitalized on the medium of television with his own weekly TV series, Disneyland. His contribution to cartoon industry has been phenomenal. The 1960s saw a decline in the entire animation industry that affected the medium as a whole for over twenty years. The cartoon creations of all the Hollywood studios seemed to be affected by an apathy that led to a general decline in quality for the industry. Creativity and originality in animation moved largely underground, to the point where quality animated films were largely produced by small, independent producers, or in countries other than America. Ralf Bakshi shocked the audience by producing the first ever animated feature film, ‘Fritz the Cat’, which was aimed directly at the adult audiences rather than the children. During the 1980s, the government put some regulations on these TV shows that it had to be considered ‘educational’ (worthy for viewing by children). Toy manufacturers and marketers took the advantage of these new standards, and the first half of the decade saw the introduction of a wave of toy-based cartoons like the ‘Transformers’ and ‘My Little Pony’. While the distinctive nature of the Japanese anime production like the ‘Star Blazers’ and ‘Robotech’, with their complex storylines and frank depiction of violence, helped create the groundswell that would lead to the major influx of anime popularity starting in the 1990’s. The rise of the music videos industry also lead to a production of a number of memorable animated videos. Towards the end of the 80’s there was a huge increase in the quantity of American animation. Cartoons were never just for children. The 1990’s saw the beginnings of a new wave of animated series targeted primarily to adults. In 1989, the ‘Simpsons’ portrayed the life of a typical middle class American family in those days. It also dealt with many political issues in the adult world, but, through an amusing, humorous way. The show was gaining a wide acclaim for its satirical handing of American culture, society as a whole and the human condition. It was a major hit and was closely followed by ‘South Park’. The American industry a sudden surge of growth in the 1990’s as yet another wild card was added, the introduction of computer animation and flash animation through the internet. This new shift of technology allowed the animation industry to take a huge step further and once again it was Disney that led the pack in this area. With the advent of advanced technology, it is expected to bring about more changes and greater developments in cartoon industry. This will indeed help convey more complicated and pressing issues in a simple way to the nations across geography, especially among children, which may include issues like environmental pollution & global warming, wild life preservation etc. But, what remained the same? The simple idea of animation and the cartoon figures stayed the same. The idea of portraying love, hate, friendship and other emotions through these figures also remained the same.  Even some characters such as Mickey Mouse still remain the same. The only thing that changed was issues shown and dealt with in this modern world.

Music has been part of many people’s life through decades and music players have always been an essential piece of electronics. From the old fashioned Gramophone to today’s nano ipods, the technology has certainly made huge jumps. Back in 1900’s the Gramophone was one of the first music players made. The turntable was rotated using a flywheel, which was kept in motion by a hand crank on the side of the machine. They became so popular that the ‘Grammy’ nickname still lives on in the Grammy music awards. Electronic record players replaced manual phonographs in the mid-20th Century. ‘Hi-fi’ technology was introduces in the 1960’s and 70’s. The term ‘hi-fi’, short for ‘high fidelity’, is given to a high quality reproduction of sounds or images. One of the first hi-fi recorders was a reel-to-reel machine which basically used a magnetic tape recording. The need of hi-fi also aroused as the audience demanded high-quality sound in the theatre to help them have a pleasant movie experience. The next major breakthrough in the hi-fi technology was the long-playing vinyl records that enabled manufacturers and record companies to put more music on one side of an album. Though perhaps not as convenient as the modern day iPods, the boombox brought music out of home and into the streets. In 1965, Philips released the first compact cassette tape that up to 45 minutes of sound on a single 1/8- inch tape. Tapes, or cassettes, quickly became a popular format for music playback, overtaking the records. It continued to dominate the portable industry world for the next 20 years. Back in the 70’s and 80’s, Sony was the king of miniaturization, and in 1979, they released the first truly self-contained portable music system, the Walkman cassette player and was a huge hit. However, CDs took over cassette tapes in both sound quality and popularity and walkmans was soon upgraded to Discman. By the end of 20th Century, the rise of personal computers forced music to go digital. MP3’s, small high- quality digital music recordings could be stored and played in computers and small music players. However, the very first solid state commercial music player didn’t come from Apple; it came from a Korean company called SeaHan Information Systems. The MPMan was the very first MP3 players of all time, containing 32 MB RAM which held around 32 minutes of music. It also had around 9 hours of battery life. However, in today’s technology, Apple continues to dominate the market with the first release of the original iPod in 2001. Only time will tell how portable media players will evolve. With innovations like touch screens, high definition video playback, wireless streaming, more memory space and more on the horizon, the first 50 years was just the beginning. The only thing that will remain the same will be people’s love for music and the initial purpose of listening to music in these music players. Touch Screens, portability, more memory and longer battery life are only few added comforts in the basic music players.

The jewellery industry is one of the very few industries that have not changed much during the last 50 years. Although, people’s likes and dislikes kept continuously changing, it has not hugely affected this industry as many still continue liking jewelleries made from Gold and Platinum which was even popular in the early days. However, the history of jewellery goes back many centuries, evolving from shells, animal teeth, and other objects used as adornment in prehistoric times. In the ancient world, gold was the most preferred metal for making jewellery as it did not tarnish and was malleable. However, it was rare. As centuries passed by many shiny metals and gemstones were found. Among the most popular ones was pearl and diamond.  It was not only used for ornaments, but also for decorating clothing in a high class population in the Victorian times. In fact, jewelleries, especially the ones made of precious metals were mainly aimed at the high class population throughout history until the invention of costume or fake jewelleries. The Hollywood influence in the 1940’s and 50’s dominated even Europe. People wanted look-alike jewelleries worn by screen idols. The 2nd World War halted production of fine and precious jewellery as the metals were rationed. Quality costume jewellery became very popular. The technical advances in production methods also encouraged to be dynamic, inventive and affordable. The costume jewellery continues to influence the market throughout the 1980’s, 1990’s and even today. However, pearls, diamonds, gold, silver and other precious metals and gems still continue to dominate the higher middle-class and high class society. Therefore, we can say that although new sophisticated designs have constantly being introduced, the jewellery industry has not changed much. What people wore 50 years or even 100 years ago, they still continue to wear them today.

The need of the changes came mainly from the requirement in the perspective of modern era redefinition. While design and technology changes with the time, the fundamental of these industries never changes. Advent of new technology only helped changes in the comfort level and spectrum of usage, gorgeous designs made it more attractive and mixed up with strong communication media, the rigorous and innovative marketing took them to the new heights. The more it changes, it gathers better attractions but even the fundamental remains very much the same, it gains in popularity with greater reach.