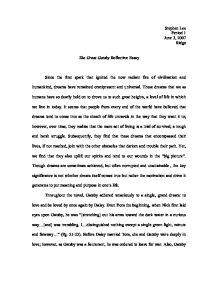 Stephen Lee Period 1 June 3, 2007 Ridge The Great Gatsby Reflective Essay Since the first spark that ignited the now radiant fire of civilization and humankind, dreams have remained omnipresent and universal. These dreams that we as humans have so dearly held on to drove us to such great heights, a level of life in which we live in today. It seems that people from every end of the world have believed that dreams tend to come true as the sheath of life unravels in the way that they want it to; however, over time, they realize that the mere act of living is a trial of survival, a tough and harsh struggle. Subsequently, they find that these dreams that encompassed their lives, if not reached, join with the other obstacles that darken and trouble their path. Yet, we find that they also uplift our spirits and tend to our wounds in the "big picture". Though dreams are sometimes achieved, but often corrupted and unattainable , the key significance is not whether dream itself comes true but rather the motivation and drive it generates to put meaning and purpose in one's life. Throughout the novel, Gatsby adhered tenaciously to a single, grand dream: to love and be loved by once again by Daisy. ...read more.

A new world, material without being real..." (Pg. 162) After the truth struck Gatsby, his whole world became different to him. He was unable to see the beauty in anything as everything became dull and colorless. His life became meaningless without his dream and without Daisy. Gatsby functioned solely by a hope that he would once receive Daisy's love, but once his dream was shattered, he had nothing else to live for and, thus, he withered inside. Much like Gatsby, I also held on to a dream that I lived for a few years back. On a school trip, I laid eyes upon a beautiful girl named Sarah. Her voice, her hair, and her everything moved me in such a way that drew me dangerously. Every move she made allured my senses and I yearned for even a single moment of eye contact. Her smile radiated throughout any room and contagiously influenced me to smile also. One day, we finally encountered one another and consequently, my heart exploded into blazing flames. A billion sparks ignited a desire, a deep longing for her. Soon, all of me functioned for her. I became consumed by her beauty and all of my actions encompassed her. Nothing else seemed to matter but her and as time passed, my dream to attain her love grew larger and stronger. ...read more.

Similarly, we tend to idolize our dreams in a way in which it becomes the most important thing to us. Our lives are altered to revolve around our goal while everything else becomes a mere blur to us. Gatsby, the world, and I were blinded of the journey we undertook, the path we walked in hopes to obtain our dream. We became oblivious to how the sheer thought of achieving our goal made us feel and how this drove us onward in our lives, much like how Gatsby was driven. Because of dreams, the real importance of life was hidden from me, the world, and Gatsby. We became consumed with the goal and the journey and the experience were distorted. Though every single individual in this world has had a dream, a myriad of them have not discovered the true significance through the pursuit. Gatsby, the world, and I believed that attaining the dearly beloved dream is of utmost importance; however we failed to realize that the journey of seeking the goal through hope reigns supreme. It is undeniable that whether the dreams we pursue comes true or not sparks our first interest; yet we must strive to see past this to embrace the true beauty of life: the journey. We as humans will always dream as it is in our nature. In the lives that we live, they will always come and go and never remain; however the incentive and drive that it generates last forever. ...read more.