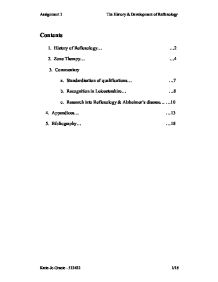 The History &amp; Development of Reflexology

Contents 1. History of Reflexology... ...2 2. Zone Therapy... ...4 3. Commentary a. Standardisation of qualifications... ...7 b. Recognition in Leicestershire... ...8 c. Research into Reflexology & Alzheimer's disease... ...10 4. Appendices... ...13 5. Bibliography... ...18 1. Write a detailed account of the history of Reflexology, and explain Zone therapy and its development. Throughout the history of mankind the feet have played an important role in healing practices. Reflexology is believed to date back to ancient times in several different civilisations. One of the most concrete proofs of this was the discovery of this wall painting in the tomb of Ankhmahor at Saqqara (on the left). This was also known as the physicians tomb, and depicts men receiving both hand and foot reflexology. It has been dated at around 2330 BC.1 There is also evidence of some kind of foot and hand therapy being practised in ancient Chinese cultures as far back as 4,000 BC,2 whilst the ancient Greeks were also believed to have practised this. Below is a picture of Tranion massaging Hippodemons foot. This has been dated at around 510 BC.3 In India, 5000 years ago, the feet were believed to represent the unity of the entire universe. The Sanskrit symbols portrayed on the feet of Buddha were seen as expressions of a higher reality. This is a line drawing of the left footprint at Pakhan-gyi, Union of Myanmar - the world's largest footprint of Buddha.4 By l00 A.D. Buddhism had spread to China where, with monks, Reflexology began to be more and more widely spread. Reflexology was practiced in China as part of acupuncture and moxibustion [The burning of moxa or other substances on the skin to treat diseases or to produce analgesia]. The Yellow Emperor's Classic of Internal Medicine describes it, where it is called the Examining Foot Method. A Japanese monk studying in China is given credit for introducing reflexology to Japan upon his return home to Nara as a medical Practitioner.5 There are several passages in the bible, particularly in the book of Corinthians that suggests certainly Paul, and probably other early Christians knew about reflexology. ...read more.

Britons currently spend �130 million a year on complementary treatments, such as acupuncture, herbalism and reflexology, and it is estimated this will rise to �200 million over the next four years. Acupuncture, osteopathy and chiropractic are already offered to large numbers of NHS patients.' - Christopher Smallwood, Economic advisor to the NHS, Quoted in the Telegraph15 - This quote was in relation to a study commissioned by the Prince of Wales which concluded that Complementary and Alternative Medicines (including Reflexology) could save the government vast amounts of money and benefit the wider economy. They concluded that it could reduce the 200 million working days and �11 billion of lost revenue per year that are a result of people taking time off work with back pain and other stress related illnesses. Unfortunately this report was met immediately with scepticism by scientists and doctors who claim that the report would not have been impartial, due to the Prince of Wales open acceptance of such practices. A fierce dispute over complementary therapies on the NHS broke out last May, with thirteen of Britain's highly revered medical experts, including Edzard Ernst, a professor of complementary medicine at the University of Exeter, writing to hospitals to discourage staff from spending money on treatments that had not been clinically proven. The Haematology unit at University College London Hospital claim to have the only paid Spiritual Healers in the NHS. These healers are part of a team of complementary therapists, including two reflexologists. It started out as a voluntary position, but as demand got higher, the hospital ended up offering to pay for them to come in more often.16 A reply to an email I sent out to Daniel Spinner,17 at the NHS customer service centre, told me that the Primary Care Trust in each local area is responsible for the use of CAM, not the NHS in general, as they have their own budget for these treatments. ...read more.

APPENDIX 5 - reply from David Simmons 9 October 2006 Dear Katie-Jo, Thank you for your e-mail of 3 October to the Department of Health about reflexology. Your e-mail has been passed to me for reply. Decisions on the commissioning of complementary and alternative therapies, including reflexology, on the NHS are a matter for Primary Care Trusts (PCTs) and local NHS service providers. The Government considers that decision making on individual clinical interventions, whether conventional, or complementary or alternative treatments, are a local matter. In making such decisions, NHS organisations have to take into account evidence for the safety and effectiveness of the treatment, and the availability of properly qualified and regulated practitioners. With the exception of chiropractic and osteopathy, all other professions which practice complementary and alternative medicine in the UK are unregulated. This means that anyone can practice regardless of their knowledge, competency or qualifications to do so. It is the responsibility of local NHS organisations to commission healthcare packages for NHS patients. Complementary and alternative medicine (CAM) treatments are clearly attractive to a number of people and so in principle could feature in a range of services offered by local NHS organisations. Therefore, if people wish to receive reflexology on the NHS, they would need to discuss this with their GP, who if convinced that it is the best treatment, may decide to make it available. However, clinical responsibility for health conditions rests with GPs, who must therefore be able to justify clinically any treatment they refer patients to. If they are unconvinced about the efficacy of reflexology for a particular condition, they cannot be made to refer the patient. There are no centrally held figures for centres that offer CAM treatments or carry out CAM research, due to the fact that funds for this come from local PCT budgets. Additionally, as CAM can feature as part of a wider healthcare package as well as an individual treatment, it is not recorded as a separate item in these circumstances. I hope that you find this reply helpful. ...read more.