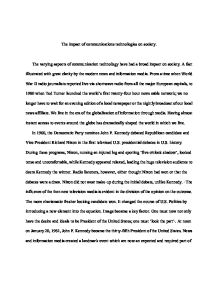 The impact of communications technologies on society.

The impact of communications technologies on society. The varying aspects of communication technology have had a broad impact on society. A fact illustrated with great clarity by the modern news and information media. From a time when World War II radio journalists reported live via shortwave radio from all the major European capitals, to 1980 when Ted Turner launched the world's first twenty-four hour news cable network; we no longer have to wait for an evening edition of a local newspaper or the nightly broadcast of our local news affiliate. We live in the era of the globalization of information through media. Having almost instant access to events around the globe has dramatically shaped the world in which we live. In 1960, the Democratic Party nominee John F. Kennedy debated Republican candidate and Vice President Richard Nixon in the first televised U.S. presidential debates in U.S. history. During these programs, Nixon, nursing an injured leg and sporting 'five o'clock shadow', looked tense and uncomfortable, while Kennedy appeared relaxed, leading the huge television audience to deem Kennedy the winner. ...read more.

try to persuade others to vote for their candidate._ Some attribute this 'barrage' of the various methods of mass communication as a key factor that led to the election of Obama over his opponent John McCain. What Barack Obama was able to do was reach demographics either previously ignored or unable to be reached by the traditional U.S. politician. Not to say that the impact of communications technologies is basely political. The 'West' has had a long standing history of conflict in varying forms with the Arab or Middle Eastern world. For many people in the West, all Arabs are Muslims, Muslim women wear black chadors, angry young Arab men commit suicide attacks because they want to be martyrs to enjoy virgins when they arrive in Paradise or Arabs ride on camels and some of them are rich oil sheikhs._ Although these pictures are full of clich�s, many of them still stick in the minds of many Westerners. ...read more.

With disbelief they watch the violent eruptions of Muslim rage and hatred towards the West after the publication of cartoons in a regional Danish newspaper, or after the Pope's speech that none of the violent protesters had seen or read. The main fault with the impact of these technologies is that the people with the most money often control what is said or broadcast. However, with the onset of self publishing via the internet with sites such as blogger and wordpress, and now with podcasting becoming more and more popular, the 'small voice' can be presented as loudly as the 'large voice'. The people now have the ability to have a direct effect on their environment. No longer must we simply sit idly by and be told what is happening by those that determine what is 'news' and what is not; what is relevant and what is not. Societies can decide what they would like shared with the world and what they would like to receive. For the first time in human history, the populous en mass has some say in how the world will be shaped. ...read more.