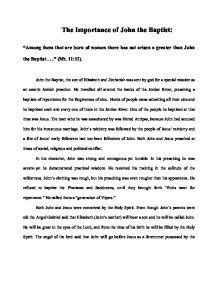 The Importance of John the Baptist

The Importance of John the Baptist: "Among them that are born of women there has not arisen a greater than John the Baptist . . ." (Mt. 11:11). John the Baptist, the son of Elizabeth and Zechariah was sent by god for a special mission as an ascetic Jewish preacher. He travelled all around the banks of the Jordan River, preaching a baptism of repentance for the forgiveness of sins. Herds of people came admitting all their sins and he baptized each and every one of them in the Jordan River. One of the people he baptized at that time was Jesus. The man who he was assasinated by was Herod Antipas, because John had accused him for his incestuous marriage. John's ministry was followed by the people of Jesus' ministry and a few of Jesus' early followers had too been followers of John. Both John and Jesus preached at times of social, religious and political conflict. In his character, John was strong and courageous-yet humble. ...read more.

John's ministry was in connection with: 1. The Holy Spirit, who worked more in accordance with the Old Testament than the New Testament. The spirit came upon John in a sudden outpouring, as with the prophets of old. John the Baptist was specifically appointed, anointed and sent of God for the ministry he carried out, and he sealed that ministry with his life's blood. 2. The baptism of John the Baptist was of much deeper significance than the baptism practiced among the Jews. The baptism of John was a divinely appointed office of his ministry; it was the baptism of repentance. Luke 3:3 tells us that John "came into all the country about Jordan, preaching the baptism of repentance for the remission of sins." This was not the baptism of regeneration. Water has never washed sin away, and never will. It is said in the Word of God "Not by Works of righteousness which we have done, but according to HIS MERCY HE saved us, by the WASHING OF REGENERATION, and renewing of the Holy Ghost(Tit 3:5). ...read more.

But John the Baptist was not imitating Elijah or anyone else. His dress and his diet, as well as his calling were of the Lord. He was like Elijah, and he was not afraid of man. King Herod arrested and beheaded John because John very plainly told King Herod that he was living in adultery because he had taken his Brother Philip's wife, Herodias. Such told preaching cost John his life. John's ministry was short but fruitful. In John 3:30 John declared "He must increase, but I must decrease." In this chapter we learn that while baptism is of the Lord, and it is most definitely important, it does not save. It has nothing to do with regeneration. The baptism of John the Baptist was of divine appointment, it was ordained of God (John 1:33). It gave a name to his entire ministry- "the baptism of John": (Mat 21-25). But the baptism of John did not save anyone. John the Baptist baptized great multitudes, among them the outstanding Person of all time. No man ever baptized one so pure, holy and high as John did when he baptized the one and only, Lord Jesus Christ. ...read more.