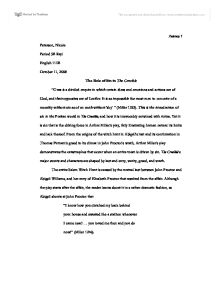 The Role of Sin in The Crucible

Peterson 1 Peterson, Nicole Period 3B Rayl English 11IB October 11, 2008 The Role of Sin in The Crucible "Ours is a divided empire in which certain ideas and emotions and actions are of God, and their opposites are of Lucifer. It is as impossible for most men to conceive of a morality without sin as of an earth without 'sky' " (Miller 1252). This is the introduction of sin in the Puritan world in The Crucible, and how it is irrevocably entwined with virtue. Yet it is sin that is the driving force in Arthur Miller's play, fully illustrating human nature: its limits and lack thereof. From the origins of the witch hunt in Abigail's lust and its continuation in Thomas Putnam's greed to its climax in John Proctor's wrath, Arthur Miller's play demonstrates the catastrophes that occur when an entire town is driven by sin. The Crucible's major events and characters are shaped by lust and envy, vanity, greed, and wrath. The entire Salem Witch Hunt is caused by the mutual lust between John Proctor and Abigail Williams, and her envy of Elizabeth Proctor that resulted from the affair. Although the play starts after the affair, the reader learns about it in a rather dramatic fashion, as Abigail shouts at John Proctor that "I know how you clutched my back behind your house and sweated like a stallion whenever I came near! ...read more.

Judge Danforth is another guilty of Peterson 3 vanity, again with his reputation. Yet the cost of his vanity is much higher than that of Parris': although it is Parris who encouraged the witch hunt hysteria, it is Danforth who condemned or pardoned the witches. In Act IV, Danforth has the authority to postpone the hangings when doubt arises as to the authenticity of the witches due to hang the coming morning. Yet Danforth does not postpone the hangings, because any doubt raised about these witches would be doubt raised about the validity of the other witches already hanged: "I will not receive a single plea for pardon or postponement... Postponement now speaks a floundering on my part; reprieve or pardon must cast doubt upon the guilt of them that died till now" (Miller 1324). Despite Hale's urging and Parris' pleas, Danforth refuses to budge- and more innocents are hanged due to his perverse sense of justice. It is Proctor's vanity, however, that strikes one the most. His vanity, again of his reputation, prevents him from revealing the root cause of the witch hysteria, and that Abigail herself revealed to him no witchcraft is involved, merely dancing. It is not until the truth will not derail the hysteria, not until that it is too late, that Proctor realizes he needs to expose their affair, in order to discredit Abigail. ...read more.

Envy is a deadly sin, Mary" (Miller 1312). Her wrath eventually achieves her aim: to scare Mary back into accusing witches with her, but has an unexpected consequence: John Proctor is accused of witchcraft. But before this, John Proctor finally comes to the court against Abigail with Mary Warren, Francis Nurse, and Giles Corey. One by one they are discredited by the judges, until John finally bursts: "How do you call Heaven! Whore! Peterson 5 Whore!" (Miller 1308), at last throwing away his own good name in an attempt to restore true justice and sanity to Salem. In a reverse scene of the first time the reader sees Abigail and Proctor meet, it is Proctor confessing the sin and Abigail denying it. Unlike with John, however, Abigail's denials work, and John is thrown into jail for witchcraft. Thus Abigail's sin has come full circle, in denying her the only thing she wanted. In conclusion, sin is what puts the Salem witch hunt in action, from Abigail and John Proctor's lust to their wrath, to the final act's portrayal of endless vanity and the resulting, perverted sense of justice on Danforth's part. However, the play concludes on an uplifting note, with several heavenly virtues in evidence with Proctor's, Rebecca's, and Martha's ascendancy to the gallows: charity, fortitude, faith, hope. Eventually these become the driving forces in ridding Salem of the witch hunt hysteria for good. ...read more.