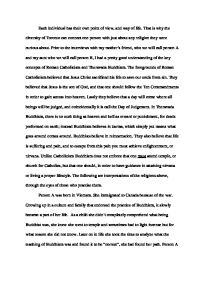 The society in which religion prospers

Each individual has their own point of view, and way of life. That is why the diversity of Toronto can connect one person with just about any religion they were curious about. Prior to the interviews with my mother's friend, who we will call person A and my aunt who we will call person B, I had a pretty good understanding of the key concepts of Roman Catholicism and Theravada Buddhism. The foregrounds of Roman Catholicism believed that Jesus Christ sacrificed his life to save our souls from sin. They believed that Jesus is the son of God, and that one should follow the Ten Commandments in order to gain access into heaven. Lastly they believe that a day will come where all beings will be judged, and coincidentally it is call the Day of Judgement. In Theravada Buddhism, there is no such thing as heaven and hell as reward or punishment, for deeds preformed on earth; instead Buddhism believes in karma, which simply put means what goes around comes around. Buddhists believe in reincarnation. They also believe that life is suffering and pain, and to escape from this pain you must achieve enlightenment, or nirvana. ...read more.

Her job at times prevents her to attend church on Sundays but she always goes if she can. Unlike person A, person B does not volunteer with her community church, but this is because she is a nurse at a hospital and is usually to busy caring for family and other social commitments. Her outlook on the effects of her religion, on her everyday life is the same as that of person A; "Religion and politics cannot be mixed." When asked whether or not religious differences had an affect on the relationships in their extended families, both interviewees stated, no it did not. Person A's extended family is very diverse in their practises. She finds that each person should be treated for who they are as a person not for what they believe in. Her daughter, who is currently in grade 9, is aware that she is Buddhist but is in the same situation like person A when she was a child, unsure of what it means to be Buddhist. Person A takes her family to temple when she goes and tries to get them to understand the religion better. ...read more.

She has noted though that women are not allowed to become priest. Catholicism has stated many time over that being gay is sinful. Person A agrees with this statement and backs it up with the idea that God has created man and women for a reason. As a majority religion in Canada she feels very welcomed to be able to find so many people who believe the same things she does. In conclusion I have learned that although these are two very different religions the two interviewees had a lot in common with each other. They both shared common views when it came to faith minorities, sexuality, the future of their kids and more. I guess in a city like Toronto the integration of many different people has gotten people use to the idea of multi religions coming together and collaborating to create a community. One of the things that have come out of this whole process of interviewing and analysis is that each person is an individual and a society is what nourishes the way they think and react to what others have to say. Our culture supports all religions and so it is understandable that my two interviewees are the same. The system in which different religions prosper Dao Dong Wednesday June 7, 2006 Mr. Kunin HRT3M1-01 ...read more.