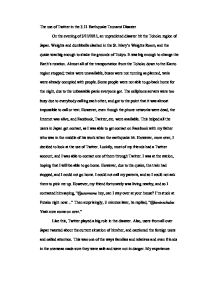 The use of Twitter in the 3.11 Earthquake Tsunami Disaster

The use of Twitter in the 3.11 Earthquake Tsunami Disaster On the evening of 3/11/2011, an unpredicted disaster hit the Tohoku region of Japan. Weights and dumbbells clashed in the St. Mary's Weights Room, and the quake was big enough to shake the grounds of Tokyo. It was big enough to change the Earth's rotation. Almost all of the transportation from the Tohoku down to the Kanto region stopped; trains were unavailable, buses were not running as planned, taxis were already occupied with people. Some people were not able to go back home for the night, due to the unbearable panic everyone got. The cellphone servers were too busy due to everybody calling each other, and got to the point that it was almost impossible to call or text. ...read more.

I was at the station, hoping that I will be able to go home. However, due to the quake, the train had stopped, and I could not go home. I could not call my parents, and so I could not ask them to pick me up. However, my friend fortunately was living nearby, and so I contacted him saying, "@username hey, can I stay over at your house? I'm stuck at Futako right now..." Then surprisingly, 3 minutes later, he replied, "@kevinschulze Yeah sure come on over." Like this, Twitter played a big role in the disaster. Also, users from all over Japan tweeted about the current situation of him/her, and cautioned the foreign users and called attention. ...read more.

Also, some users retweeted some of the tweets made by @japantsunami, and called attention to users that were not following @japantsunami. This caused a chain reaction, and some users re-retweeted the tweets and so on. Also, hash tags were used, saying #prayforjapan, #japan, #311, and called more attention to the whole twitter server world. This kept people thinking and praying about the 311 disaster, and created a network in Twitter. This is one of the examples of the hash tags. Like this, people called attention and #prayedforjapan. Other examples for supporting Japan were mainly involved in donations. In the whole network, there were tweets saying, "RT and I will donate $1 for each RT" Like this, many users used the retweeting technique in Twitter, and used it to donate and help the suffering Tohoku people. Like this, twitter played a big role in the disaster, and was very important to the Japanese. ...read more.