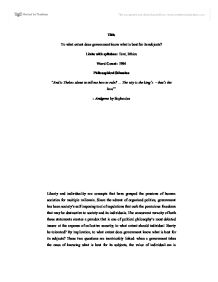 To what Extent Does Government Know What is Best for its Subjects? (Stimulus: Antigone)

Title To what extent does government know what is best for its subjects? Links with syllabus: Text, Ethics Word Count: 1994 Philosophical Stimulus "And is Thebes about to tell me how to rule? ... The city is the king's - that's the law!" - Antigone by Sophocles Liberty and individuality are concepts that have grasped the passions of human societies for multiple millennia. Since the advent of organized politics, government has been society's self-imposing tool of regulations that curb the pernicious freedoms that may be destructive to society and its individuals. The concurrent veracity of both these statements creates a paradox that is one of political philosophy's most debated issues: at the expense of collective security, to what extent should individual liberty be tolerated? By implication, to what extent does government know what is best for its subjects? These two questions are inextricably linked: when a government takes the onus of knowing what is best for its subjects, the value of individualism is depreciated, for it is suggested that government has the right to override individuality for the sake of greater good. In the play Antigone by Sophocles, Creon, king of Thebes, has issued a law that forbids the burial of the killed Theban traitor Polynices. ...read more.

Would it not be unjust if Creon's agenda were, in fact, contrary to Thebes' best interest? Indeed, if this were the case, would not the actions of government be classed as oppression, not paternalism? It is precisely these questions that unravel Hobbes' argument. The line between paternalism and oppression is hazardously thin; by utilitarian standards, the former is justifiable but the latter is not. John Stuart Mill acknowledges the paternalistic strain in many governments - that many regard themselves to have a 'duty... to prohibit what they think is pernicious' [p.25. Mill, J. 1859, On Liberty; subsequent citations refer to this text]; that power is 'given to men that they may use it.' [p.25] However, Mill nevertheless underlines that no one is a vehicle of 'infallibility' [p.24]. Governments are by human nature 'corrigible' [p.27]. Contrary to Hobbes' conception of authority, government does not necessarily entail irrefutability and they do not necessarily bring about collective security. The implication for this is that perhaps it is a mistake to forsake liberty to authority, for governments themselves may be fallible; they may, in fact, not always know what is best for its subjects. ...read more.

Creon, like Hobbes, believes the duty of government is to safeguard its citizens. In fact, this much is commonly accepted throughout political doctrines: government exists to protect. However, Hobbes asserts that individual liberties are directly pernicious to this protection. He calls for a tyrant in the vein of Creon to take the onus of doing what is personally felt to be best for the people. Surely, this cannot be a just doctrine; the opportunities for oppression are all too viable. Furthermore, Mill argues that governments are not always incorrigible, for in reality, nobody is. Furthermore, we cannot have government telling us what is best, because they do not; the PRC may think themselves to be benevolent when censoring pornography but they fail to see that the government's moral values are not necessarily applicable to all of its subjects. Lastly, the promotion of liberty involves a utilitarian benefit: the 'unfailing and permanent' [p.80] progression of society. Perhaps we can conjecture another function of government: to promote the progression of its people. If this is the case, rather than dictating a set of values for its people to conform to in the name of security, governments should promote liberties in the name of dignified human development. In conclusion, governments do not know best, and in any case, the greatest good arises from liberty, not dictation. ...read more.