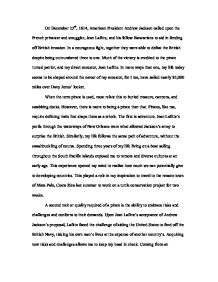 On December 23rd, 1814, American President Andrew Jackson called upon the French privateer and smuggler, Jean Lafitte, and his fellow Baratarians to aid in fending off British invasion. In a courageous fight, together they were able to defeat the British despite being outnumbered three to one. Much of the victory is credited to the pirate turned patriot, and my direct ancestor, Jean Lafitte. In more ways than one, my life today seems to be shaped around the career of my ancestor, for I too, have sailed nearly 85,000 miles over Davy Jones' locker. When the term pirate is used, most relate this to buried treasure, cannons, and swabbing decks. However, there is more to being a pirate than that. Pirates, like me, require defining traits that shape them as a whole. ...read more.

Upon Jean Lafitte's acceptance of Andrew Jackson's proposal, Lafitte faced the challenge of aiding the United States to fend off the British Navy, risking his own men's lives at the expense of another country's. Acquiring new risks and challenges allows me to keep my head in check. Coming from an educational background that included three years of home schooling while living on our boat, and five years of academically demanding private school, I naively assumed that the transition to a public high school at the 9th grade would be a breeze. In light of this belief, I enrolled in the International Baccalaureate program. However, coming from this educational atmosphere, I found the transition to a large high school difficult, for I hadn't yet developed adequate time management skills, and therefore received mediocre grades. ...read more.

In order to preserve the loyal ties with his Baratarians when fighting a neighbor of their homeland for a country thousands of miles from their roots, it was essential for Lafitte to defend his pride. Maintaining pride is a fundamental aspect in defining the person I am. I continually stay in touch with my heritage, whether it is through daily conversations in French with my father or one of my two brothers, or our annual trips to France to visit family. Currently my family is building a house in the southern French Mediterranean village St. Paul de Vence, where my father was raised and where his side of the family resides. My French and pirate roots flow perpetually through my blood. I am outwardly an honest seafarer, but like Jean Laffitte, un pirate au coeur. Word count: 654 ...read more.